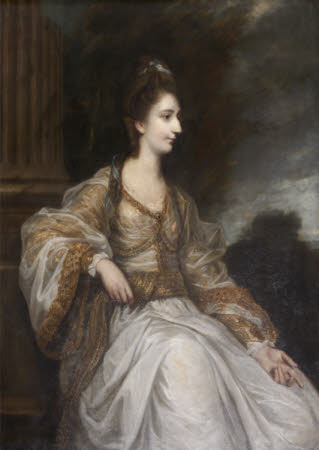 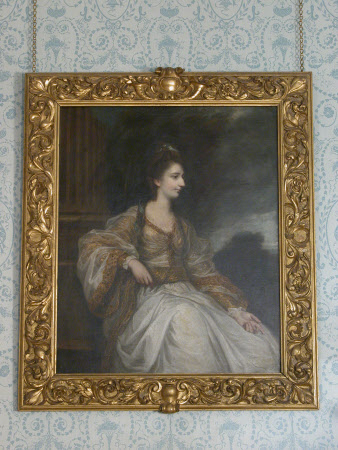 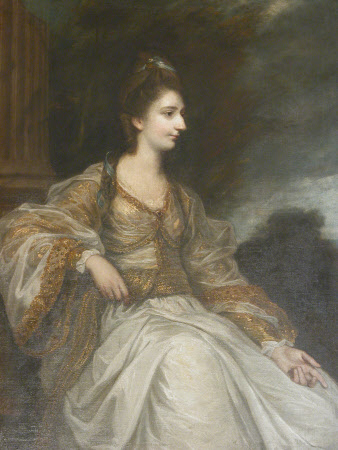 Oil painting on canvas, Lady ‘Harriot’ Christian Henrietta Caroline Fox-Strangways, Mrs John Dyke Acland (1750-1815) by Sir Joshua Reynolds PRA (Plympton 1723 - London 1792), inscribed bottom left: Lady Harriot Acland / 1771. Portrait of a young woman, three-quarter-length, seated, turned slightly to the right, full profile to the right. Seated beside a stone pillar and plinth which are to the far left. She rests her right elbow on the plinth, her right hand pointing downwards rests on her lap. She had brown hair which is dressed high on the head with a blue ribbon. She is wearing a white dress with gold braiding, a gold embroidered 'Turkish' scarf at her waist and a white gauze shawl with gold braiding is wrapped over both shoulders and arms. Behind in the centre are some trees and on the right is a distant landscape view with trees and cloudy sky. Daughter of Stephen Fox, 1st Earl of Ilchester and Elizabeth Horner; married Colonel John Dyke Acland (1746-1778). (1 of a pair - see KIL/P/82).