Sir Thomas Dyke Acland, 9th Baronet of Columbjohn (1752-1794) with Staghounds on the Holnicote Estate from the South West 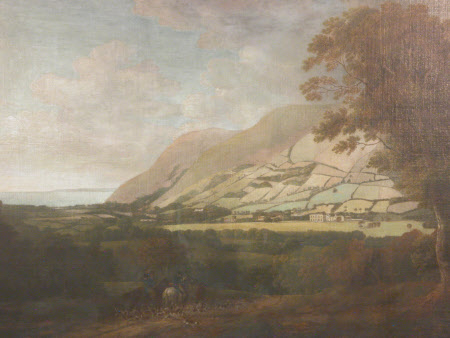 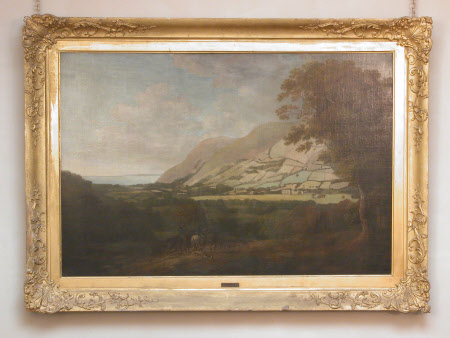 Francis Towne is best known for his distinctive topographical watercolours but he also occasionally worked in oils near to his adopted hometown of Exeter painting the ‘Devonshire’ landscape. This panoramic view of a country house estate near Minehead - now part of Exmoor National Park, in Somerset, showing Holnicote House as rebuilt after the fire of 1779 in the distance and complete with the presence of the staghunting landowner - demonstrates the great pride the gentry took in their property in England at the end of the 18th century. The painting with Towne’s characteristic crisp outlines, delicate colour and tonal variations is based on a drawing (without the repoussoir tree on the right), now in the National Gallery of Canada, Ottawa, which is characteristically inscribed by the artist as being sketched on the spot in the evening light of 3 October 1785.

Oil painting on canvas, Sir Thomas Dyke Acland, 9th Baronet of Columbjohn (1752-1794) with Staghounds on the Holnicote Estate from the South West by Francis Towne (Isleworth, Middlesex 1739 - London 1816), 1785. Holnicote House and park, seen from the south-west, with the hills behind, a repoussoir tree to the right, and the sea to the left. In the foreground, a pack of hounds on a road, with three mounted huntsmen in darkish blue including a portrait of Sir Thomas; other riders and figures further in the distance on the road. Sir Thomas Dyke Acland’s life was dedicated to staghunting and he lived chiefly at Holnicote, near the ancient royal forest of Exmoor renowned for its red deer, only acquiring his vast family seat of Killerton when he succeeded his seven-year-old nephew Sir John, 8th Baronet (his elder brother having already died) in April 1785. On 4 July 1785 he married Henrietta Anne Hoare, a daughter of Sir Richard Hoare of Barn Elms and Frances Anne Acland.