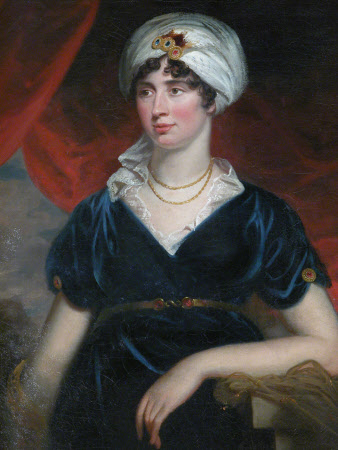 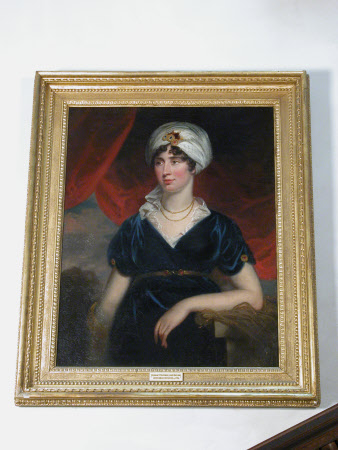 Oil painting on canvas, Henrietta Anne Hoare, The Hon. Mrs Matthew Fortescue, formerly Lady Acland (c.1765-1841), British (English) School, circa 1795/40. Formerly attributed to George Sanders (1774-1846). A three-quarter-length portrait of a young woman, three-quarter profile, facing, head turned slightly to the left and gazing to the left. She leans with her left arm on a ledge on which lies her pale brown gauze scarf which is also wrapped around her right arm which is at her side. The tight curls of her short brown hair emerge across her forehead from a white silk turban in the centre of which there is a large jewelled ornament. She is wearing a dark blue (velvet?) dress with short sleeves caught up with a small gold jewel with a red stone. At her waist is a gold belt with a clasp composed of two red jewels. A white lace or gauze collar emerges from a v neckline and she wears a necklet of two small gold chains. A red curtain above and to right with a landscape to the left. Henrietta Hoare was the only daughter of Sir Richard Hoare, 1st Bt, of Barn Elms, and sister of Sir Richard Colt Hoare of Stourhead (NT). She was married in 1785 to Sir Thomas Dyke Acland, 9th Bt (1752-1794) of Killerton (NT) and, after his death, secondly, in 1795 to Captain the Hon. Matthew Fortescue, RN (1754-1842), brother of the 1st Earl Fortescue, as his second wife, and whose pendant portrait also hangs at Killerton (NT 922267). She was an amateur artist, and the 'pupil and lifelong friend' of Francis Nicholson (1753-1844), who based some of the views that he exhibited of foreign parts that he had never seen on her sketches.

Hung at Holnicote House until 1978, when lent to Killerton; acquired by the National Trust as acceptance lieu in 1995 as attributed to George Sanders.Sir Richard Acland lent this portrait and the portrait of her husband, Matthew Fortescue to the Holiday Fellowship before Killerton opened to the public

Killerton House, Devon, 2000 [The National Trust] 2000, p.11: "THE MUSIC ROOM PICTURES RIGHT OF THE FIREPLACE The Great Sir Thomas's mother, Henrietta Hoare (d.1841). She shared her husband's stern outlook. In 1806, on Thomas's departure from Oxford she wrote: Let your joy be rational and contained within due bounds, let it be the feeling of a man of sense not of a wild inconsiderate school boy, whatever you do, he on your guard - make no promises you may repent of hereafter and see with your eyes open, not thourgh a glass darkly. Six years later, his progress was disappointing, and she issued a reprimand: I have heard of you making morning visits when people are at dinner, that is all very good fun for a School Boy but not proper for Sir Thomas Acland who I hope to see member for the County.. will you remember you are withina few days of being five and twenty - surely that is an age one may expect steadiness if it is ever to arrive at all. Like her son, Henrietta was a talented artist, and several of her watercolours are on display." Illus p.38: "Henrietta Acland, who dominated the childhood of her son Sir Thomas Dyke Acland, 10th Bt: painted about 1795 (Music Room)."