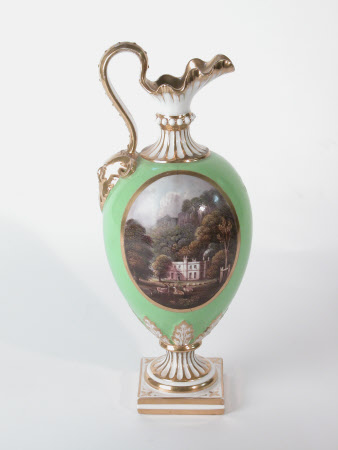 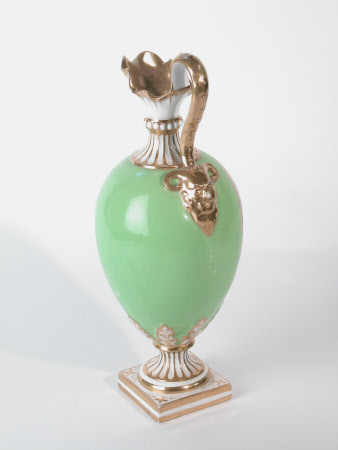 View this pair of beautiful Derby Vases, one of them shows a painted scene of Killerton House. Can you imagine your home on a vase two hundred years old?

A Derby porcelain ‘Kedleston shape’ or ‘ewered vase’, one of a pair, polychrome painted with an oval named view of Killerton Park, on a green ground with gilt details, the base marked in red ‘Bloor Derby’, Robert Bloor proprietor, ca. 1832-25. The view is based on steel engravings published in Thomas Allom, Devonshire Illustrated, in a Series of Views of Cities, Towns, Public Buildings, Streets, Docks, Churches, Antiques, Abbeys, Picturesque Scenery, Castles, Seats of the Nobility, &c. &c., with Historical & Descriptive accounts by J. Britton & E. W. Brayley Esq, published by Fisher, Son & Co., London, (1829–1832), and is after a watercolour by William Henry Bartlett, the elder (1809–54), engraved by Henry Wallis (ca. 1805–90).