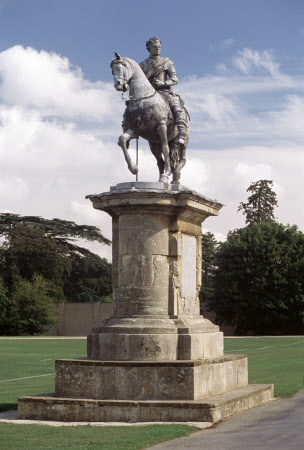 Lead on stone pedestal, equestrian statue of George I (1660–1727), cast by John Nost II (d.1729) after a model by Charles Burchard (fl.1716-1722), 1723-4. The first king of the new Hanoverian dynasty, George I is modeled after the antique equestrian statue of the Emperor Marcus Aurelius in the Musei Capitolini, Rome (inv. MC3247) and the equestrian statue of Charles I by Hubert Le Seur, cast 1633 (Charing Cross, London). He is depicted in plate armour, crowned with laurels and holding a rod of office in his left hand.

After the death of his second cousin Queen Anne (1665-1714), George Ludwig (1660-1727), prince-elector of Hanover, ascended the British throne as the first king in a new Hanoverian dynasty. His ascendance had been secured by the 1701 Act of Settlement, when Catholics were excluded from inheriting the throne despite there being over 50 Stuart claimants in the line of succession. This equestrian monument at Stowe, one of a number of versions cast by John Nost II possibly after a model by C. Burchard, has its prototypes in both the Capitoline Marcus Aurelius and the equestrian statue of Charles I by Hubert Le Sueur. Quoting Marcus Aurelius and his Roman Empire was the ‘perfect idiom’ to convey ‘political conformity’ in the face of potential opposition, while quoting Charles I drew an hereditary link between the British Stuart and Hanoverian dynasties, confirming George of Hanover, a German, as the rightful inheritor of the British crown (Sicca and Yarrington 2000, pp.39-41). Further visual sources for the statue are probably Titian's equestrian portrait of Charles V (Museo del Prado, Madrid, inv.no. P000410) and Anthony Van Dyck's equestrian portrait of Charles I (National Gallery, London, NG1172). Though statuary was one way of publicising George’s image and his Protestant values, the king understood that ostentatious displays of self-glorification would not endear him to the Whig government or his people. The Crown spent very little on public monuments and most official portrait statues were commissioned by patrons outside immediate royal circle (Sicca and Yarrington 2000, p.41). The Stowe statue, for example, was commissioned by the soldier and Whig politician Richard Temple, 1st Viscount Cobham (1675-1749), after a model commissioned in 1716 by the Duke of Chandos (1673-1744). Casts after the Chandos model include the Stowe version in lead, cast 1723-4 for the sum for £150, and earlier casts made by Nost II for the City of Dublin (bronze, 1717), for the town of Gosport in Hampshire (lead, 1718) and for the Whig politician Charles Powlett, 3rd Duke of Bolton (1685-1754), of Hackwood Park (lead, 1722). The Stowe monument was commissioned by Richard Temple to celebrate his return to political favour after the death of Queen Anne. It was to George I that Temple owed his title of Viscount (1718) and the restitution of his military command, enabling him to profit handsomely from the Capture of Vigo (1719). By 1797 the statue was installed in its present position on The Course. Alice Rylance-Watson January 2019