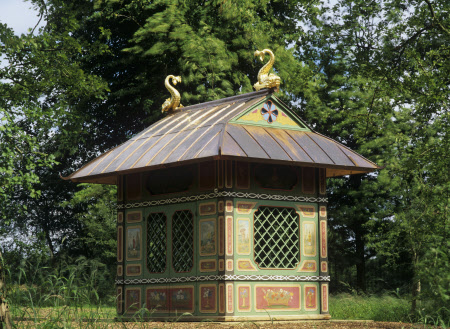 Commissioned by Sir Richard Temple, Viscount Cobham (1675-1748), possibly designed by William Kent (c. 1685-1748) and with painted decorations by Francesco Sleter (1685-1775), and at Stowe by 1738; by descent to Richard, 2nd Earl Temple (1711-1779), who moved it to Wotton House, Buckinghamshire, in around 1751, and thence by descent; sold as part of the Wotton estate to Major Michael Beaumont, 1929; moved by Major Beaumont to Harristown House, Brannockstown, Co. Kildare, Ireland, 1957, and thence by descent at Harristown House; purchased by the National Trust by private treaty with grants from the Monument Trust and the Pilgrim Trust and part of a bequest from the late Alec Clifton-Taylor, 1993.