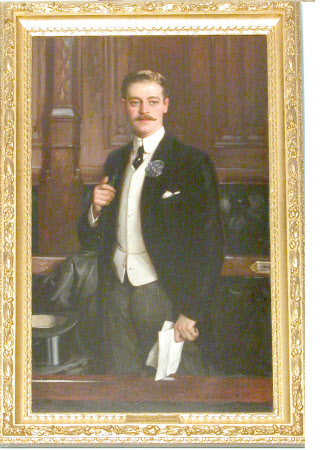 'The best dressed man in Parliament' was how the media described Tommy Agar-Robartes (1880-1915). This picture was paid for by 15,000 Cornish Liberals in appreciation for Tommy's work as their MP.

Oil painting on canvas, The Hon. Thomas Charles Reginald Agar-Robartes, MP (1880-1915) by Richard Jack (Sunderland 1866 – Montreal 1952), signed and dated, bottom right: R.JACK 1907. A three-quarter length commemorative portrait of Thomas ('Tommy') Charles Reginald Agar-Robartes, the eldest son of the 6th Viscount Clifden as MP of Bodmin until 1906. He is standing wearing morning dress, addressing the House of Commons, his right hand holding his lapel and his left holding his notes. He was presenting the first reading of the Land Tenure Bill. He was later elected MP for St Austell in 1908 until his death at the Battle of Loos in 1915.