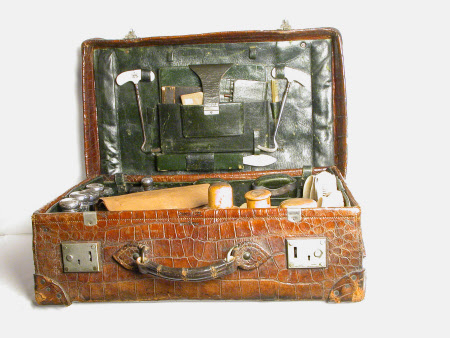 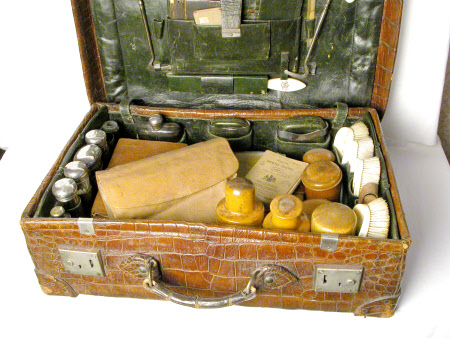 In December 1915 Viscountess Clifden wrote of her '4 sons still fighting in France'. Tommy, the eldest, was already dead - falling in September 1915. This dressing case was returned from Loos and is now on display in his bedroom.

Crocodile skin dressing case from Mappin and Webb, Oxford Street, London, with reinforced corners and three crocodile skin covered handles. The interior is of dark green leather and the two sides of the base are self contained and can be removed from the case in entirety. The contents, including those which are indigenous to the case and which are stamped Mappin and Webb, are listed separately. The case. LAN.L.131, belonged to Captain The Hon. Thomas (Tommy) Agar-Robartes and was taken by him to France and returned to the family after his death in 1915.

A gift from The Hon. Gerald Agar-Robartes, 7th Viscount Clifden, who gave Lanhydrock to the National Trust in 1953, and continued to live there until his death in 1966. The case and contents belonged to Captain The Hon. Thomas (Tommy) Agar-Robartes and was sent back to Lanhydrock after his death in France having been wounded at the Battle of Loos, September 1915. It remained untouched in the luggage room until discovered by Michael Trinick in the 1980's.