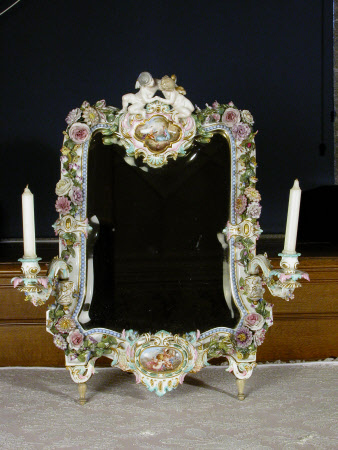 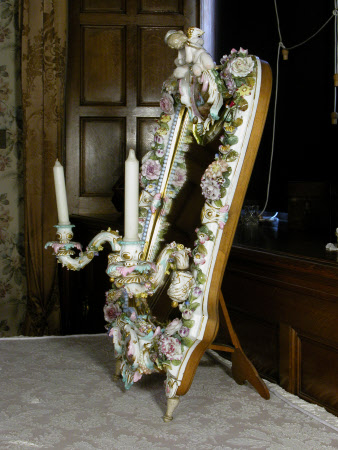 A reflection of opulence. A Meissen mirror given to Mary Dickinson on her marriage to Thomas Charles Agar-Robartes in 1878.

German framed dressing table mirror in the late 19th Century Meissen style, encrusted with flowers and foliage upon a white and gilt frame, edged with a row of blue beads and mounted with two candleholders; the base with a rococo cartouche painted with two putti with bow and flowers, the upper section with an elaborate cartouche painted with figure of a seated gentleman playing a guitar while a seated lady listens. The top is surmounted by winged cupids. Over painted underglaze blue fake Marcolini Meissen mark. Late 19th Century.

Acquired during transfer of the house to the National Trust which was given by the Hon. Gerald Agar-Robartes, later 7th Viscount Clifden, who lived there with his sisters, Everilda and Violet, until his death in 1966. Believed to have been a wedding present from his father, the Hon.Thomas CharlesAgar-Robartes, later 6th Viscount Clifden, to his mother, Mary Dickinson, in 1878.