Survey drawing of the garden at Boringdon House, Devon 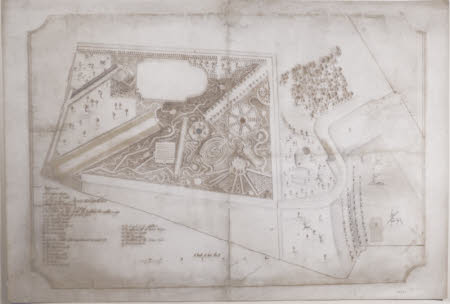 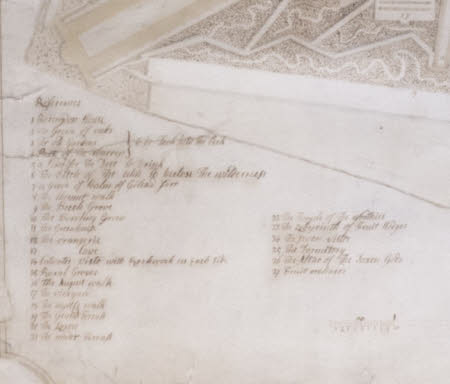 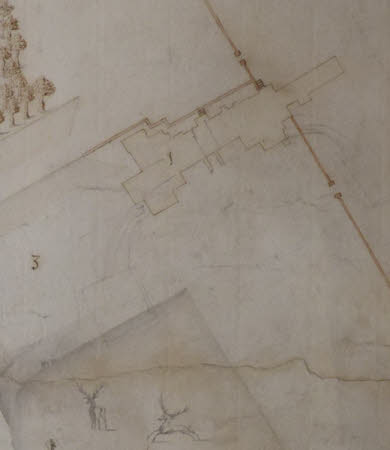 Pen with sepia and grey ink, watercolour and pencil on paper

Survey drawing of the garden at Boringdon House, Devon, c.1735. Anonymous, pen with sepia and grey ink, watercolour and pencil, scale 1in to 66ft.

John Parker married Frances Mayhew, the heiress to Boringdon in 1583, and the family continued to live there until 1743 when they moved to Saltram only a few miles to the south. This extraordinarily elaborate garden plan evidently dates from just before the move, when plans were also afoot to regularise the entrance front of the old Elizabethan and Jacobean house, and add flanking pavilions joined by curving quadrants – shown here faintly pencilled in. This Palladian solution could be associated with William Kent himself, who produced a design for a great house with similar quadrants that still survives among the Parker papers in the Devon Record Office (Cornforth, 1967, p. 998, fig. 2). No vestiges of such a garden now remain at Boringdon, though the ha-ha shown at the top of the drawings is roughly in line with a field boundary on the high downs above the house. Furthermore, the precipitous nature of the site makes it unlikely that the design could have been achieved without considerable earth-moving. It is puzzling that the style of drawing looks more like a survey than a design, but that may simply be explained by the designer having trained as a surveyor. The great interest of this layout is its mixture of formal and informal features crammed into a comparatively small space, and still more, the appearance of a ‘Temple of the Worthies’, an Altar of the Saxon Gods’ (with radiating walks evidently leading to their statues) and a ‘Dormitory’. All these rare features are alos found in the gardens at Stowe: the Dormitory or Temple of Sleep, designed by Vanbrugh before 1726; the Saxon Gods, carved before 1731 by Rysbrack to stand around a seven-sided altar; and Kent’s Temple of British Worthies, built in 1735. Another possible link is the mention of a ‘Cave’ in the key – with a blank space before it, as if the surveyor could not remember (or understand) its correct name – for it is tempting to compare this with Dido’s Cave at Stowe, once again in existence by 1731. Charles Bridgeman, who was so deeply involved with the creation of the Stowe landscape, may have had a hand in the garden at Castle Hill, not far from Boringdon, in the 1730s, for the turf ‘ramparts’ there are very much in his style. However, the Boringdon plan lacks the bold axial vistas and the essential unity of his designs, and is equally alien to the more flowing naturalism of Kent’s Elysian Fields at Stowe, and his work at Rousham. One can only think that it represents a provincial response to one of the most influential gardens of its day, perhaps following a visit to Stowe either by the Parkers or by their unknown garden designer. Another source for the crowding together of different geometrical features might be Robert Castell’s imaginary reconstruction of the gardens round the younger Pliny’s villa at Tusculum, illustrated in his Villas of the Ancients in 1728 (Dixon Hunt and Willis, 1975, fig. 69). Boringdon House, sold by the Parker family in 1920, has recently been rescued from dereliction and converted into a hotel.’