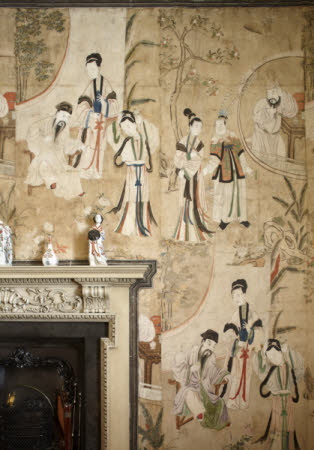 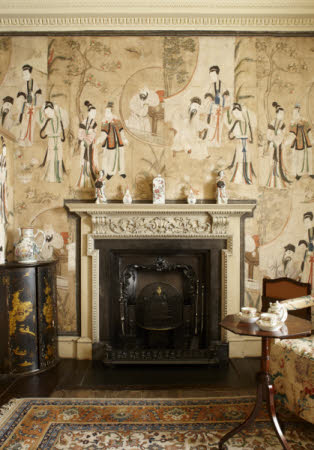 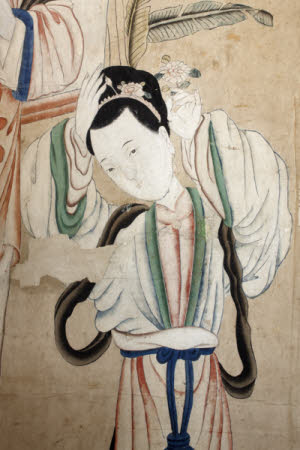 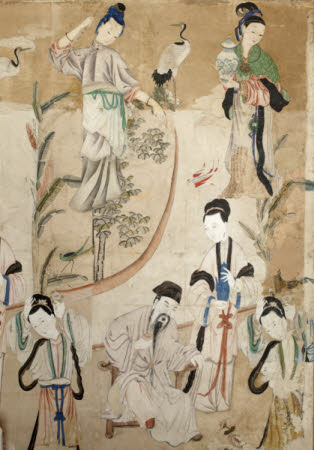 The black outlines of the scenes were woodblock-printed, with the colours and some of the facial details added by hand. The copies of the two prints were hung in an alternating pattern and with some of the edges trimmed in order to suggest a panoramic scene. The prints depict scenes from the Chinese historical novel Sanguozhi, or The Romance of the Three Kingdoms, a saga of heroism and intrigue set towards the end of the Han dynasty (206 BCE-220 CE) and during the subsequent Three Kingdoms period (220-280). One of the prints shows the minister Wang Yun and his adoptive daughter Diaochan, just as he has the idea to use her beauty to cause the downfall of the tyrannical warlord Dong Zhuo. Wang Yun then shows Diaochan to Dong Zhuo's adoptive son, the young general Lü Bu, who falls in love with her. Soon afterwards Wang Yun also introduces Diaochan to Dong Zhuo, who takes her as his concubine. The other print shows Dongh Zhou discovering an encounter between Diaochan and the lovestruck Lü Bu. After several more developments, aided by the ingenuity of Diaochan, Lü Bu kills Dong Zhuo, thereby achieving Wang Yun's plan. In view of their subject matter, these prints will have been made for the Chinese market. However, this set was somehow brought to England, probably in the private cargo of an East India Company official, to be sold on as wall decoration by a paper hanger or a luxury goods merchant. Western viewers would not have understood the literary subject of the prints and would have appreciated them simply as Asian scenery. There are about 20 alternating pairs of prints on the main walls of the room, and more on a partition inserted on one side of the room. The partition also has a few copies of prints of Daoist immortals (see NT 872998) and cranes. The scheme is framed by an English hand-printed border paper with beading and a key fret pattern in white against black. See Emile de Bruijn, Andrew Bush and Helen Clifford, Chinese Wallpaper in National Trust Houses, Swindon, National Trust, 2014, cat. 38, pp. 40-1; Emile de Bruijn, Chinese Wallpaper in Britain and Ireland, London, Philip Wilson in collaboration with the National Trust, 2017, pp. 50-3.

Probably installed for John Parker (1703–68) and his wife Lady Catherine (née Poulett, 1706–58), after the former inherited the Saltram estate in 1743. Accepted together with the house and the rest of the contents by HM Government in lieu of inheritance tax and allocated the National Trust, 1957. By the early 1960s the prints had become detached from the walls in places, so conservation treatment (including relining) was commissioned from C.P. Sharpe in 1962. In 1987 the scheme was removed from the walls, treated and relined by Merryl Huxtable and Pauline Webber in conjunction with G. Jackson and Sons.