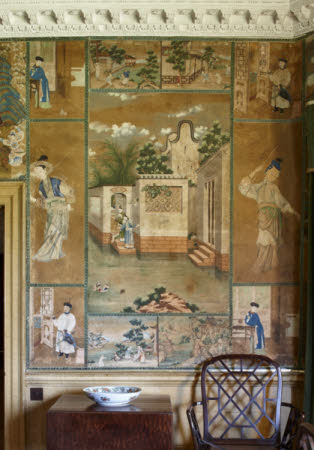 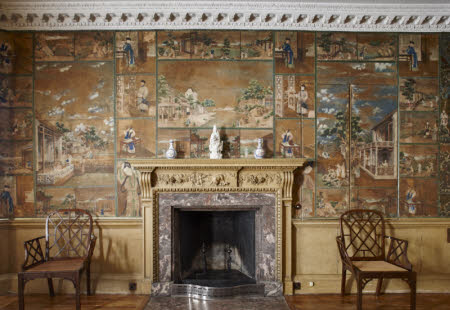 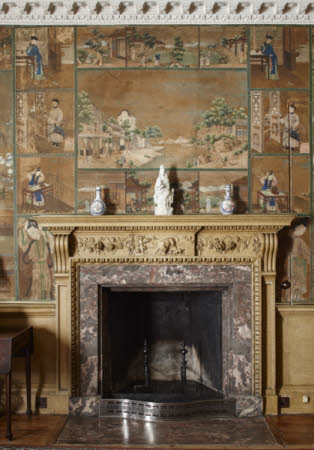 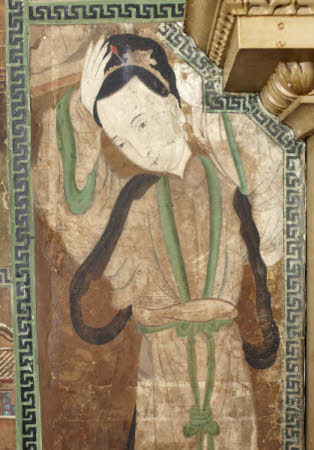 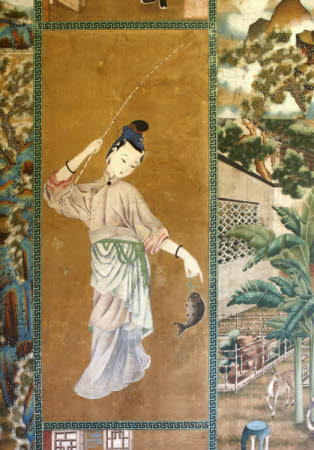 A collage of about 60 Chinese paintings on paper and woodblock prints applied symmetrically to the walls of the Study (which was probably a family sitting room in the mid eighteenth century).

The individual pictures are separated by strips of European paper. They include landscapes in various formats depicting the gardens and surroundings of mansions or palaces, probably typical of the architecture and gardens of the Yangzi River delta. The clouds in the skies in some of the larger pictures appear to have been painted in at the time of hanging. Some of the smaller landscapes include figure groupings suggestive of stories of love and intrigue. During conservation some of the pictures were found to have been inscribed with numbers in Chinese characters on the back, indicating that they had been produced as a set. The paintings are interspersed with multiple copies of several prints of single figures in interiors. There are also some larger-scale prints of female figures, probably representing Daoist immortals, some of which are also found in the collage wallpaper in the Chinese Dressing Room at Saltram (NT 872998). Two of these prints, a female figure holding a fishing rod and a fish and another with a hoe and a basket slung over her shoulder, appear to have served as models for the architect William Chambers when he amalgamated them in an image of ‘a country woman’ in plate 19 of his 1757 book Designs of Chinese Buildings – he may have seen copies of these prints in a shop selling ‘East India’ goods or a paper-hanging establishment in London as he was preparing the book in the mid-1750s. A decorative scheme similar to this one at Saltram, but made up just with Chinese prints, survives at Milton Hall, Peterborough, where it was probably installed in the early to mid-1750s. There is a reference to another such scheme, created for Lady Mary, Countess of Cardigan (later Duchess of Montagu, c. 1711–75), by the cabinetmaker Benjamin Goodison, who pasted eighty-eight ‘Indian pictures’ on the walls of a dining room, probably at Montagu House, Richmond, in 1742. See Emile de Bruijn, Andrew Bush and Helen Clifford, Chinese Wallpaper in National Trust Houses, Swindon, 2014, cat. 40, pp. 42–3; Emile de Bruijn, Chinese Wallpaper in Britain and Ireland, London, Philip Wilson Publishers in collaboration with the National Trust, 2017, pp. 37–42.

Probably installed for John Parker (1703–68) and his wife Lady Catherine (née Poulett, 1706–58), after the former inherited the Saltram and Devon settled estates in 1743. Accepted together with the house and the more important contents by HM Government in lieu of inheritance tax and allocated to the National Trust, 1957. Full conservation treatment of the whole scheme, including relining and the infilling of significant losses, was carried out by Sandiford and Mapes in 1997.