The Apollo Belvedere (Grisaille Paintings of Classical Statuary: a set of eight reproductions of celebrated antiques with the addition of niches, pedestals, classical masonry, trees, etc.) 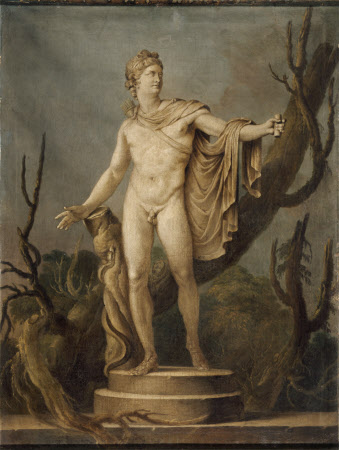 The Apollo Belvedere was rediscovered and owned by Giuliano della Rovere at SS Apostoli, Florence before he became Pope Julius II and installed it in the Cortile del Belvedere, Vatican, Rome, after 1506, now in the Vatican Museums. This is one of a set of eight paintings of celebrated classical antique marble statues from ancient Greek statuary, painted in grisaille (grey-green monochrome colour) by Louis-Gabriel Blanchet in 1765 with the addition of niches, pedestals and trees. The set was probably commissioned as souvenirs, by John Parker, MP (1734/5 – 1788) during his Grand Tour of Italy, with his first wife, in 1764, and may have occupied a garden building at Saltram.

Probably commissioned by John Parker, later Lord Boringdon, on his Grand Tour, 1765; then, from the absence of any reference to them in catalogues or inventories and their plain white frames, probably set into the walls of some garden building; given to the National Trust as part of the endowment by Montagu Brownlow Parker, 5th Earl of Morley (1878-1962)