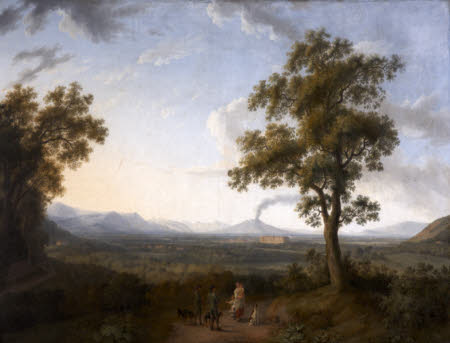 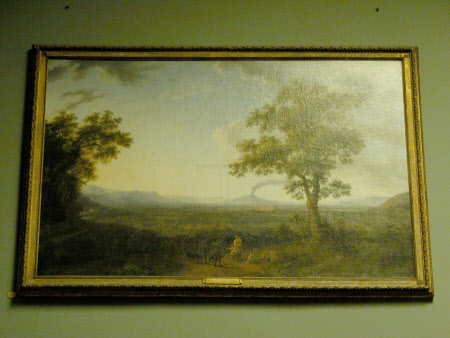 Oil painting on canvas, View of the Plain of Caserta seen from the Royal Belvedere by Jakob Philipp Hackert (Prenzlau 1737 – San Piero di Careggi 1807), signed and dated, bottom centre: Philippe Hackert f.1785 and inscribed: Caserta prise du Belvedere du Roi. A view across the extensive plain with the palace in the middle distance and Vesuvius on the skyline. Two huntsmen have stopped on a path in the foreground to talk to a peasant woman and her children. The new palace of Caserta was built fifteen miles north of Naples from 1751 for Charles III and his successor Ferdinand IV of the Kingdom of the Two Sicilies. The Belvedere, which took its name from its dominating position, was a small casino, situated on the Southern slopes of Monte San Leucio, which had once belonged to the ancient lords of Caserta. It was enlarged by Ferdinando I Bourbone who, soon after 1785, started a flourishing silk weaving industry nearby. The view southwards shows the royal palace of Caserta, with Vesuvius in the distance. It was vast, but unbeautiful, hence its relegation by Hackert to a minor incident in his view. Hackert himself was from 1786 given lodgings in the old palace by King Ferdinand. He was first encouraged to paint the scene by a commission for it and four other views from the Grand Duke Paul of Russia and his wife, when they were touring Italy incognito as the Comte & Comtesse du Nord in 1782. This is a repetition, apparently painted for a 'Sig.Shard, Inglese', of the picture executed in 1784, which originally hung at Pavlovsk, but was transferred in 1933 to the Hermitage. Both were, however, preceded by a variant gouache, one of a set of four painted in 1782 for the Palazzo Reale in Caserta itself, at the behest of Ferdinand IV, to whom the Russian ambassador, Count Razumoffsky, had introduced Hackert as a result of the original commission. The inscriptions on all of these are in French, because that was the language of the courts of Russia and of Naples.

Given to the National Trust as part of the endowment by Montagu Brownlow Parker, 5th Earl of Morley (1878-1962)