Vortigern, King of Britain, enamoured with Rowena at the Banquet of Hengist, the Saxon General 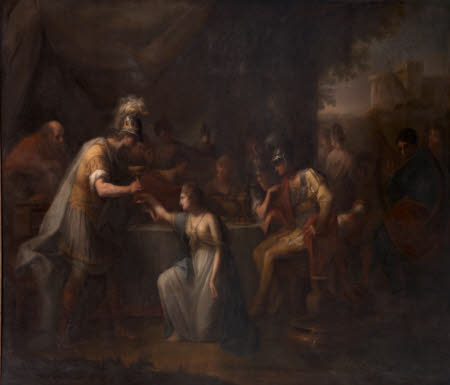 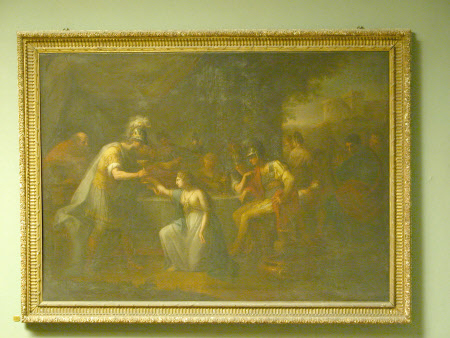 The ancient legend tells how the Britons were betrayed to the Saxons. Rowena is kneeling and accepting a cup from Vortigern, Prince of South East Britain, who has fallen in love with her. Her father, the Saxon, Hengist is present, standing behind whilst soldiers sit a round a table. The story was recounted with some romantic license by Geoffrey of Monmouth (d.1155) and given extra authenticity by being included in John Speed’s History of Great Britain (1611). When it exhibited at the Royal Academy in 1770, it was said to be the first public exhibition of a mediaeval piece in London. Angelica may have seen Henry Fuseli’s drawing of the same subject from the year before, now in the Kunsthaus, Zürich. but she may also have had access to Paul Rapin de Thoyras’s History of England whose folio edition, published between 1742-47 had Rowena and Vortigern depicted on its headpiece.

Oil painting on canvas, Vortigern, King of Britain enamoured of Rowena, at the banquet of Hengist, the Saxon General by Angelica Kauffman RA (Chur 1741 – Rome 1807), 1770. Rowena is kneeling in front, in the centre accepting the cup from Vortigern. Her father Hengist stands behind on the left. Soldiers sit a round a table on the right. The story of Rowena and Vortigern, taken from ancient legends, was recounted with some romantic license by Geoffrey of Monmouth (d.1155), acquiring added ‘authenticity’ by being included first in John Speed’s History of Great Britain…(1611), then in Paul Rapin de Thoyras’s History of England…, an elaborate illustrated folio edition published in 1742-47, which included a small engraved head piece illustrating the story of Rowena and Vortigern. It tells of how Vortigern, Prince of South East Britain, fell in love with Rowena, the Saxon Hengist's daughter, and hence betrayed the Britons to the Saxons.

Commissioned by an unknown client, but left on the artist's hands and bought by John Parker, later Lord Boringdon (1734/5-1788) before 24 August 1775; thereafter by descent; accepted by HM Treasury in part payment of death-duties from the executors of Edmund Robert Parker, 4th Earl of Morley (1877-1951) and transferred to the National Trust in 1957