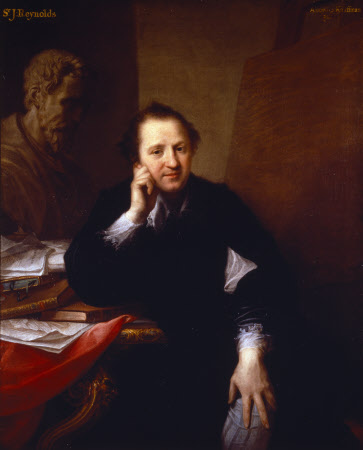 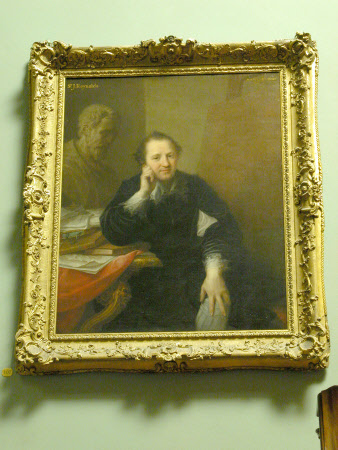 In this portrait of her great friend, Angelica Kauffman presents Sir Joshua Reynolds as a man of style and culture. He wears Van Dyck costume which was fashionable during the reign of George III. He sits beside a table strewn with papers and philosophical volumes, behind which is a bust of Michelangelo, an artist revered by Reynolds.

Oil painting on canvas, Sir Joshua Reynolds PRA (1723-1792) by Angelica Kauffman RA (Chur 1741 – Rome 1807), signed and dated, top right: Angelica Kauffmann Pinx: / 176[7?]. He is seated three-quarter length facing, his head resting on his right hand. He is wearing 17th-century 'Van Dyck' dress. Books, with whom all three authors Reynolds was friends - Johnson's periodical The Idler, Burke's Sublime and the Beautiful and Goldsmith's The Traveller (1764) - are on a table on the left next to an engraving of an ancient sculpture. A bust of Michelangelo by Daniele da Volterra which Reynolds painted in his Self-Portrait of 1780 (Royal Academy, London) is behind.