Interview of Edgar and Elfrida after her Marriage to Athelwold 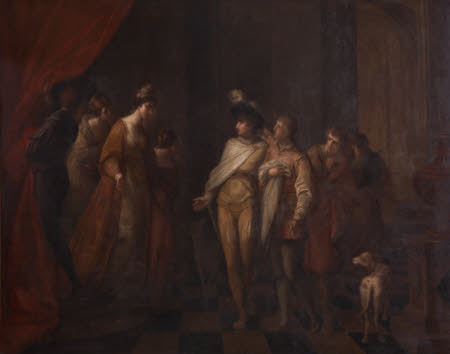 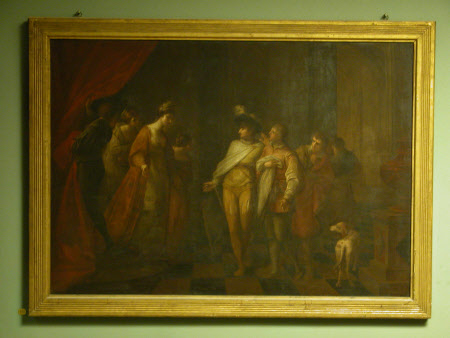 According to legend, King Edgar sent his favourite servant, Earl Athelwold, to meet his intended bride Elfrida (daughter of Ordgar, Earl of Devonshire). Athelwold was smitten and immediately married her himself. He told Edgar that she was no beauty but the King’s suspicions were aroused and he decided to pay her a visit. He was so angry at being deceived and she at being denied the opportunity of marrying a king, that he killed Athelwold. Elfrida became Queen and was the mother of King Etheldred II. When this painting was exhibited at the Royal Academy in 1771, it was said to have raised Angelica Kauffman’s reputation to the highest point. Ironically, the artist was reportedly not able to sell it for some time; it was bought by John Parker, later Lord Boringdon, by August 1775.

Oil painting on canvas, Interview of Edgar and Elfrida, after her marriage to Athelwold by Angelica Kauffman RA (Chur 1741 – Rome 1807). Elfrida stands on the left, with her attendants one of whom holds a curtain aside and reveals her to King Edgar who is accompained by two courtiers and a dog. According to the legend, Edgar the Peaceable in 963, sent his favourite and most trusted Earl Athelwold to meet Edgar’s intended bride Elfrida, the daughter of Ordgar the Earl of Devonshire. On meeting Elfrida, Athelwold was smitten with her beauty and married her. The scene painted shows the moment when King Edgar, suspicious, arrives at their castle in Devon to meet Athelwold's wife and is angry at being deceived by his trusted servant who claimed she was no beauty. She was also angry at being denied the opportunity of marrying a king. Later on a hunt in the Harewood Forest, Edgar kills Athewold and marries Elfrida, who becomes Queen and subsequently the mother of King Etheldred II, having killed Edgar's first son by his first marriage, Edward 'the Martyr' after his death.

Commissioned by an unknown client, but reportedly 'left on the artist's hands', and bought by John Parker, later Lord Boringdon, before August 1775;thereafter by descent;accepted by HM Treasury in part payment of death-duties from the executors of Edmund Robert Parker, 4th Earl of Morley (1877-1951) and transferred to the National Trust in 1957