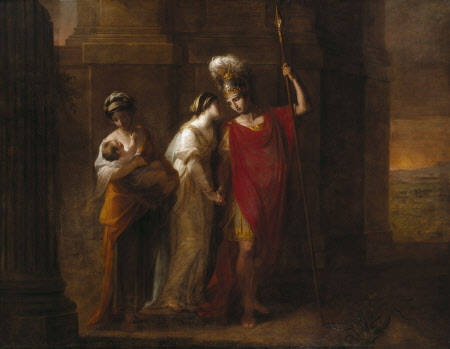 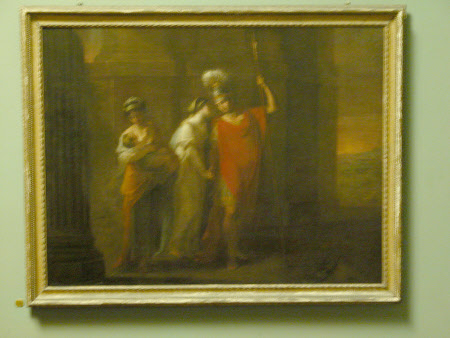 Hector, son of the King of Troy, prepares to go to battle. He wears his plumed helmet and holds a spear. He stands hand-in-hand with Andromache, his devoted wife, in front the gates of Troy. A nurse is holding their son Astyanax. The child prefers to look into her eyes rather than towards his father, who is attired for war. The scene depicts an episode from Homer's epic poem 'The Iliad'. The wife of the first owner of the picture, Theresa Parker, declared in a letter to her brother: 'The prettiest and I think the best she [Angelica Kauffman] ever did is the painting of Hector and Andromache.' The painting was exhibited at the Royal Society of Arts in 1768 and at the first Royal Academy exhibition in 1769. The artist was a founder member of the Royal Academy and a friend of Sir Joshua Reynolds.

Oil painting on canvas, Hector taking leave of Andromache by Angelica Kauffman RA (Chur 1741 – Rome 1807), 1768. The scene depicts an episode from Homer's Iliad 6: 394-96. Hector and Andromache stand together in front of a classical building, representing the gates of Troy, behind them on the left, a nurse is holding a child, their son Astyanax. Hector is wearing his plumed helmet and his warriors clothes with a red over garment and holds a spear in his left hand. Frame: Carved and oil giltwood frame with laurel leaf on sight edge, a carved pea moulding on the outer edge of the face and a gadroon moulding on the outer back edge.

Angelica Kauffman sent this Homeric painting to the inaugural exhibition of the Royal Academy in 1769. Hector Taking Leave of Andromache depicts a famous episode from the Homer’s great epic The Iliad. Here, Kauffman explores her trademark interests in masculine heroism and feminine fortitude, and in the conflicts between public duty and private life. She depicts the moment in Homer’s tale when the doomed Trojan hero, Hector, heading for battle, bids a reluctant, lingering but ultimately steadfast farewell to his wife Andromache and their child, Astyanax. Such paintings fused the weighty storylines of heroic sacrifice with more intimate and domestic narratives of farewell.

Exhibited at the Society of Artists in 1768 and Royal Academy in 1769; acquired by John Parker, later Lord Boringdon (1734/5 – 1788) and thereafter by descent;accepted by HM Treasury in part payment of death-duties from the executors of Edmund Robert Parker, 4th Earl of Morley (1877-1951) and transferred to the National Trust in 1957