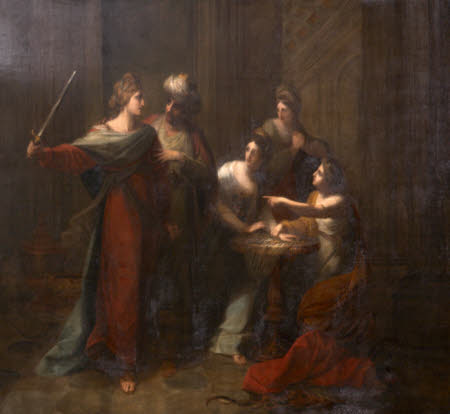 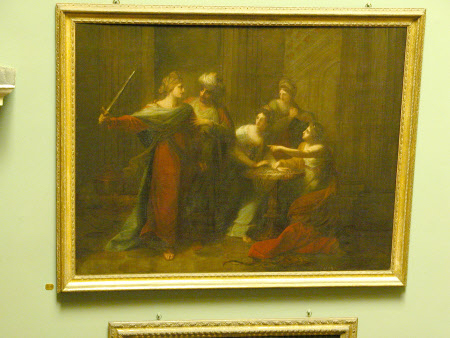 Ulysses, wearing a turban, places his hand on Achilles’ arm and looks him in the eye. Thetis, knowing that her son would be killed if he were to fight in the Trojan War, sends Achilles to the court of Lycomedes, where he is disguised as a girl amongst the King’s daughters. Ulysses comes in search of Achilles after an oracle states that Troy cannot be taken without him. Disguising himself as a merchant, he offers jewellery and arms for sale. Lycomedes’ daughters go for the jewellery, but Achilles betrays his true sex by instinctively choosing the armour and trying out the weapons. The story is related in Hyginus and Ovid's Metamorphoses 13:162-70. This painting was exhibited at the first Royal Academy exhibition in 1769 by Angelica Kauffman, a co-founder of the Royal Academy and friend of Sir Joshua Reynolds.

Oil painting on canvas, Ulysses discovering Achilles (amongst the attendants of Deidamia) by Angelica Kauffman RA (Chur 1741 – Rome 1807), 1769. A classical scene where, Achilles, disguised as girl among the daughters of Lycomedes to avoid serving in the Trojan War and his fated death, instinctively chooses the armour of Ulysses rather than the jewellery and therefore betraying his true sex. It is related in Hyginus 96 and Ovid's Metamorphoses 13:162-70. He stands on the left in a classical interior, in female dress but with a drawn sword. Another man, Ulysses, stands beside him wearing a turban and has his left hand on Achilles' left arm and looks him in the eye. Two women are seated at a table on the right and one stands behind. One of the women on the right points to Achilles.

Exhibited at Royal Academy in 1769; acquired by Theresa and John Parker, later Lord Boringdon (1734/5 – 1788); thereafter by descent;accepted by HM Treasury in part payment of death-duties from the executors of Edmund Robert Parker, 4th Earl of Morley (1877-1951) and transferred to the National Trust in 1957