Penelope taking down the Bow of Ulysses 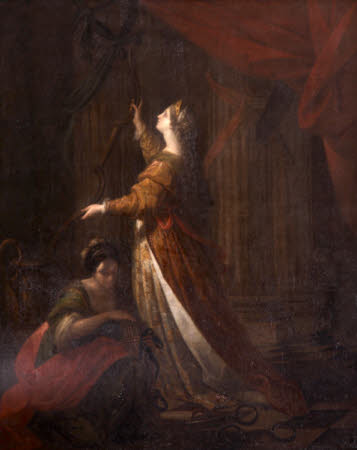 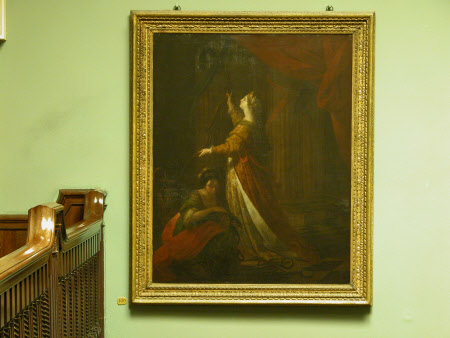 1768 (exhibited at Society for Artists)

After his purported death Ulysses’s wife is pursued by suitors, as related in Homer’s epic poem the Odyssey. In an attempt to stave them off, Penelope prepares the bow, quiver and axes and arrows for the competition of whosoever could emulate her husband’s feat of shooting an arrow between twelve axe-rings placed in a row, she would marry. This painting was exhibited at the first Royal Academy exhibition in 1769 by Angelica Kauffman, a co-founder of the Royal Academy and friend of Sir Joshua Reynolds.

Oil painting on canvas, Penelope taking down the Bow of Ulysses by Angelica Kauffman RA (Chur 1741 – Rome 1807), exhibited at the Society for Artists in 1768 and the Royal Academy in 1769. A scene from Homer's Odyssey 21: 352-3, when Penelope promises to marry whoever could emulate Ulysses' feat of shooting an arrow between twelve axe-rings placed in a row. She reaches up for the bow in the centre and a servant with the quiver, kneels beside her, on the left, with the axes and arrows on the ground in front. Behind them are two large classical columns and red drapery on the right.

Exhibited at the Society of Artists in 1768 and Royal Academy in 1769;acquired by Theresa and John Parker, later Lord Boringdon (1734/5 – 1788) and; thereafter by descent; accepted by HM Treasury in part payment of death-duties from the executors of Edmund Robert Parker, 4th Earl of Morley (1877-1951) and transferred to the National Trust in 1957