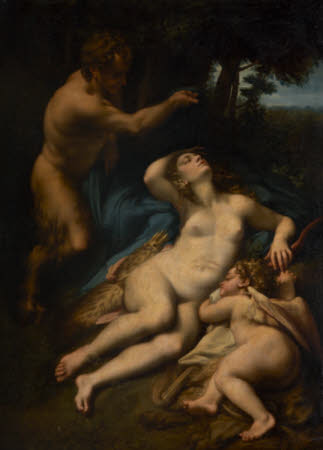 The traditional title is misleading, as, instead of showing, Jupiter, in the disguise of a satyr lifting up the garment of Antiope and about to ravish her in the woodlands, according to the Roman poet Ovid’s Metamorphoses, it is more likely that it is Venus who is sleeping, accompanied by Cupid with her torch, and representing earthly love. The original painting is now in the Louve, Paris but was once owned by Count Nicola Maffei, a close relative of Federico Gonzaga in 1536 with Venus with Mercury and Cupid ('The School of Love'), now in the National Gallery, London, painted around 1524-27, as its pendant, representing heavenly love. They were both subsequently owned by the Gonzagas in Mantua and Charles I.

Oil painting on canvas, Venus, Satyr and Cupid, traditionally called Jupiter and Antiope (copy after Correggio), after Correggio (Correggio c.1489 – Correggio 1534). A late 18th or early 19th century copy after the original in the Louvre, Paris which was one of the Gonzaga pictures acquired by King Charles I by Correggio. Despite the traditional title from Ovid's Metamorphoses showing Jupiter disguised as a satyr to ravish the young nymph Antiope because of the presence of a sleeping cupid it could be Venus that is depicted. The original was a once pendant for Venus with Mercury and Cupid ('The School of Love'), now in the National Gallery, London, painted around 1524-27, perhaps for Count Nicola Maffei, a close relative of Federico Gonzaga at whose home these two paintings could be found from 1536 and probably represent earthy and heavenly love. The latter painting was recorded in the Gonzaga collection in Mantua by 1627 and was owned by Charles I.

Accepted with Saltram house and contents by HM Treasury in part payment of death-duties from the executors of Edmund Robert Parker, 4th Earl of Morley (1877-1951) and transferred to the National Trust in 1957