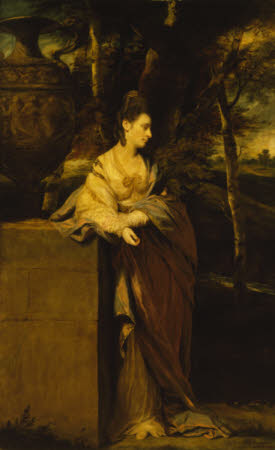 This is a tender full-length portrait in a landscape of Theresa, the second wife of John Parker (1734/5-1788) (created Lord Boringdon in 1784, after her death), a regular patron and friend of the artist. His mother is reputed to have given Reynolds, born only four miles from Saltram, his first pencil. Reynolds depicts Theresa in profile, an austere presentation often used for funerary images. This was an uncanny choice as Theresa died three years after the portrait was completed. Theresa was loved and admired for her good nature and taste, not least by Reynolds who was very fond of her and wrote her obituary. Of this portrait, she wrote: 'Mr Parker says I am drawn feeling my pulse; it may not be the less like for that, as I am apt to do so'.

Oil painting on canvas, The Hon. Theresa Robinson, Mrs John Parker (1744/5-1775) by Sir Joshua Reynolds PRA (Plympton 1723 - London 1792), bottom left: Theresa Dr. of Ld. Grantham/& Wife of Jn°.. Ld. Boringdon. A full-length portrait of Mrs Parker, standing on the left in a wooded landscape. Her face is in profile and her right arm is resting on a pedestal, on which there is a vase and her left hand rests across her right forearm as if feeling her pulse.

Accepted by the Treasury in part payment of death-duties from the executors of Edmund Robert Parker, 4th Earl of Morley (1877-1951) and transferred on loan for a term of 50 years to NT in 1957.