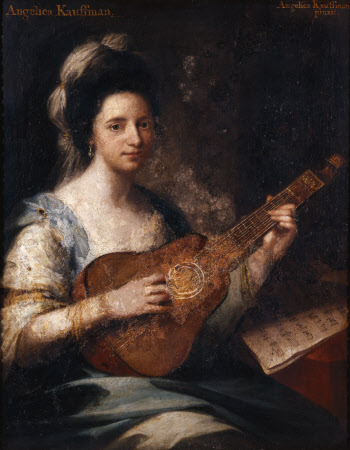 Angelica Kauffman produced a number of self-portraits during her lifetime, most of which portray her as the consummate artist, active at her easel or with a sketchbook in hand. Kauffman was also a talented musician, said to be a musical prodigy, and in this early work she depicts herself at leisure, playing a guitar with sheets of music open on a table at right.

Oil painting on canvas, Self-portrait by Angelica Kauffman RA (Chur 1741 – Rome 1807), circa 1764. A half-length to the right, head facing, in white dress, blue cloak and lace headdress, playing a guitar, a score of music beside her on the table.