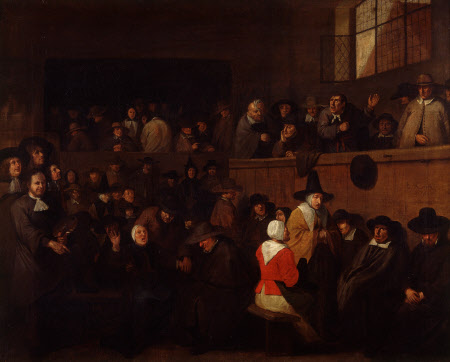 Oil painting on canvas, A Puritan Meeting, with a Self-portrait of Egbert Van Heemskerck (c.1635-1704) by Egbert van Heemskerck the elder (Haarlem c.1634 – London 1704), signed and dated, centre right: E Hkerk / 1678. Numerous figures in a hall, some seated in a gallery at the right. Isolated members of the congregation appear to be singing, but they may be talking, declaiming or snoring. In the left-hand corner, the artist himself holding a palette in his hand, is discerned. He is indicating, with a mocking expression, an old woman beside him having a religious fit. This is one of only five certain works by Heemskerck, who came to England in the 1670s and is known for painting scenes of tavern and domestic interiors, trial and Quaker meetings.