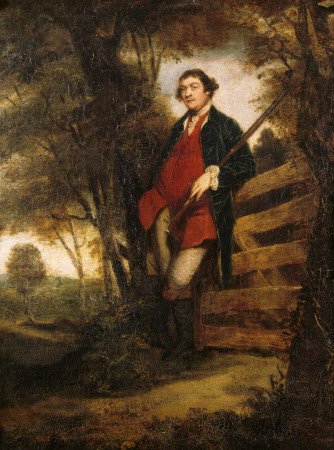 John Parker is shown at ease, relaxing against a gate with gun in hand and the landscape rolling out behind him. Reynolds spent time with the Parker family in 1770, staying mostly at Saltram (with some time in Torrington) between 10 September until 7 October. He filled his time visiting local families at Port Eliot and Mount Edgcumbe as well as spending time looking at the paintings in the house at Saltram. He also went hunting with John's brother Frederick (Fritz) who said 'Sir Joshua will not easily quit this place and country' and who noted 'There never was so chearfull agreeable simple a man as Sr Joshua.'

Oil painting on canvas, John Parker, 1st Baron Boringdon (1734/5-1788), with his Gun,leaning on a Gate by Sir Joshua Reynolds PRA (Plympton 1723 - London 1792), 1770 (?). John Parker, Lord Boringdon, son of John Parker of Saltram and Catherine, daughter of Lord Poulett. Full length, leaning against a gate, facing left, wearing blue coat and red waistcoat, his gun resting on the crook of his left arm, his right hand in his pocket. Landscape in background.