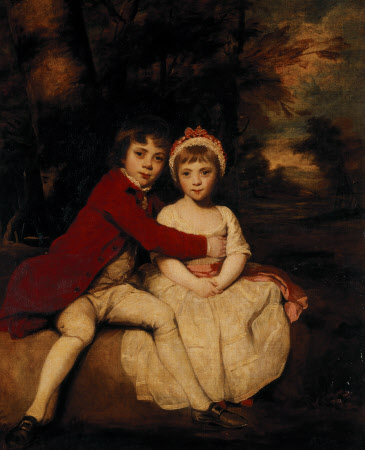 A charming portrait of John Parker, later 1st Earl of Morley (1772-1840) and his Sister, Theresa Parker, later the Hon. Mrs George Villiers (1775-1792), as children, painted by Sir Joshua Reynolds PRA (1723-1792). Family records reveal that this was apparently a characteristic pose of the children.

Oil painting on canvas, John Parker, later 1st Earl of Morley (1772-1840) and his Sister Theresa Parker, later the Hon. Mrs George Villiers (1775-1856), as children by Sir Joshua Reynolds PRA (Plympton 1723 - London 1792), 1779. John and Theresa as children are seated full length on a bank beneath a tree. The little girl, right in white dress, pink sash and white cap with a pink ribbon, faces the spectator, her hands folded on her lap. The boy, wearing a red coat and white breeches, has his arms round the waist of his sister. John Parker, son of 1st Lord Boringdon. Created Earl of Morley. Theresa married George Villiers, son of 1st Earl of Clarendon.

Sittings February to April 1779; possibly not delivered to Saltram until 1781 - hence the date in the inscription; and by descent thereafter; At Saltram by 1951 and accepted by HM Treasury in lieu of full payment of Estate Duty from the Executors of Edmund Robert Parker (1877-1951), 4th Earl of Morley and transferred on loan to NT Saltram in 1957 and transferred as an outright gift to NT in 1984 under s.9 of the Heritage Act 1980 to be maintained and preserved for display to the public at Saltram House with which they have a significant association.