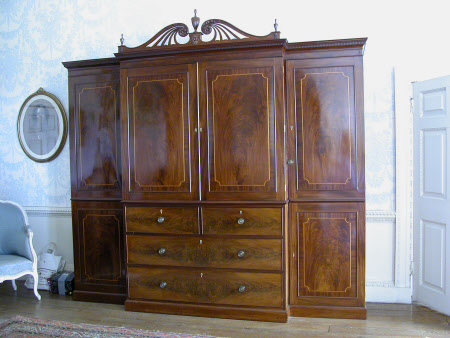 A mahogany and inlaid breakfront press cupboard, or wardrobe, English, late 18th century. The pierced and carved urn-centred pediment later. With this removed, this press is a very near pair to NT 871469. Topped by a moulded and dentilled cornice above a central pair of paneled doors, with boxwood or holly line inlay. The doors enclosing four slides and above two short and two graduated long drawers, all cockbeaded. This central section flanked to either side by a door of two panels, similarly inlaid, and with a waist moulding. The left-hand door enclosing wooden hooks and a later rail; the right-hand door enclosing five shelves. All on a breakfront plinth base. Crossbanded throughout.

Date of introduction to Saltram not recorded but at Saltram by 1951 and accepted by HM Treasury in lieu of full payment of Death Duty from the Executors of Edmund Robert Parker (1877 - 1951), 4th Earl of Morley and transferred to the National Trust in 1957.