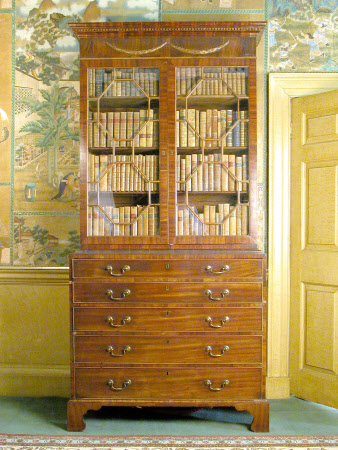 A mahogany secretaire bookcase, English, circa 1775, bearing the trade label of Henry Kettle (c. 1770 - c. 1797). Topped by a moulded and dentilled cornice above a frieze applied with a laurel swag. The bookcase doors enclosing two banks of three shelves and with astragal glazing. The bookcase sitting in a moulding to the top of the chest base. The base faced as five graduated and cockbeaded drawers. The upper pair, however, a single fall front enclosing a fitted interior of drawers and pigeonholes; the small drawer to the lower right-hand side fitted with divisions for pens and ink pots. The drawers with original brass handles and backplates and raised on bracket feet.

Traditionally thought to have been acquired new by John Parker (1734/5 - 1788), 1st Baron Boringdon for Saltram. Surviving bills, dated 1796 - 7, from Oakley & Kettle suggest that one member of the family was buying from Kettle in the 18th century. However, it is possible that this bureau was intended for another Parker house, Whiteway, nr. Chudleigh in Devon, rather than Saltram. The Pembroke table (one of a pair) at Saltram which bears the same Kettle trade label (NT 871330.1) also bears a paper label reading 'Lady K. Parker', probably the Katherine Parker who died in 1910, one of the Whiteway Parkers. However, Whiteway was built in the 1770s by John Parker, 1st Baron Boringdon, so it is possible that the Pembroke tables and, by extension, this bureau (which dates from the same period of Kettle's career) were bought for Whiteway. Henry Kettle Jr. was the son of Henry Kettle Sr. and Anne Tilley. One of their daughters, Anna Maria (b. 1731) married William Henshaw, who was presumably the Henshaw that took Henry Kettle Jr. - the cabinet maker who made this bureau - into partnership in about 1770. Henry Kettle Jr.'s younger brother, named Tilly for their mother's maiden name, was born in 1735 and was the portrait painter who achieved some fame in his career. His wife was Mary Paine, daughter of the architect James Paine. Henry Kettle Jr. appears to have set up on his own at 18 St. Paul's Churchyard circa 1774 but by 1777 seems to have been operating from No. 23, where he took over Philip Bell's firm. (Megan Wheeler, 2017)

No documentary evidence of acquisition but at Saltram by 1951 and accepted by HM Treasury in lieu of full payment of Death Duty from the Executors of Edmund Robert Parker (1877 - 1951), 4th Earl of Morley and transferred to the National Trust in 1957.