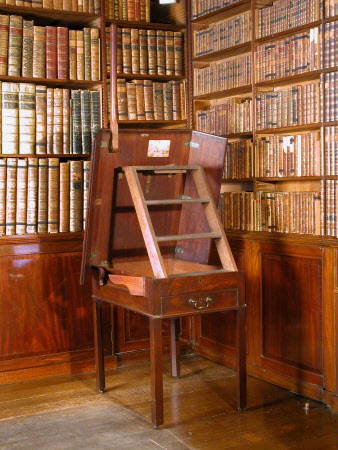 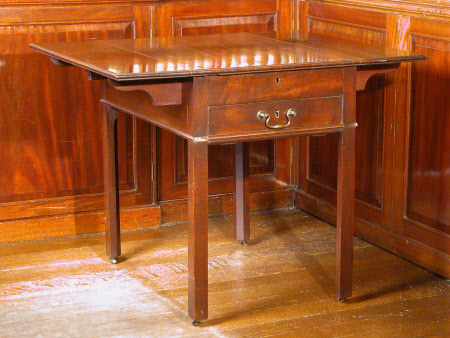 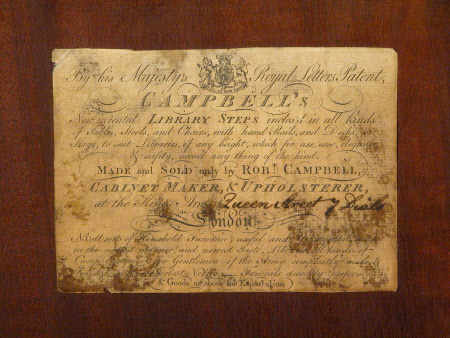 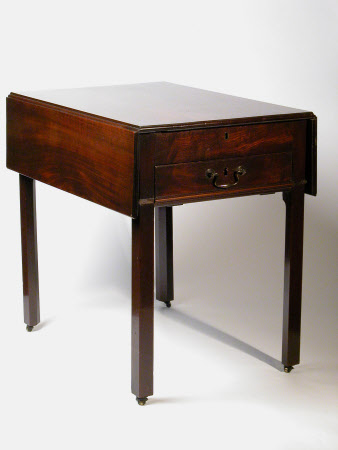 A mahogany metamorphic Pembroke table and library steps, English, supplied to Saltram in 1777 by Robert Campbell (fl. 1754 - c. 1790), of Seven Dials, London. The top with a pair of drop-leaves and above a frieze drawer. The top rising on hinges to reveal a folding set of steps of three treads; the top fitted with a handle. On four square-section legs with castors.

With a pasted trade label reading ‘Campbell’s Newly invented Library Steps inclos’d in all kinds of Tables, Stools, and Chairs, with hand Rails, and Desks, or Maps, to suit Libraries, of any height, which for use, ease, elegance & safety, exceed any thing [sic] of the kind. Made and Sold only by Rob:r Campbell, Cabinet Maker, & Upholsterer at the King’s Arms, Queen Street, 7 Dials, London’. This table cost John Parker (later 2nd Baron Boringdon) £6 10S. Campbell’s contemporary, the furniture designer Thomas Sheraton, considered the piece so significant and revolutionary that he illustrated it in his 1793 publication ‘The cabinet-maker and upholsterer's drawing-book’. While metamorphic library steps such as this appear to have been popular at the turn of the eighteenth and nineteenth centuries, relatively little is known about the development of their design. Robert Campbell was a pioneer of dual-use furniture in Britain, his library steps being patented in 1774. His first set of library steps was stated to have been made of King George III. Describing his own firm as ‘Upholsterers to their Majesties’, Campbell was repeatedly employed by the Prince of Wales, the future George IV, at Carlton House.

Supplied by Robert Campbell to John Parker (1734/5 - 1788), 1st Baron Boringdon in 1777. Thence by descent to Edmund Robert Parker (1877 - 1951), 4th Earl of Morley and accepted by HM Treasury from his Executors as that part of the contents to be acquired using funds from the National Land Fund to defray the Estate Duty otherwise payable and transferred to the National Trust in 1957. .