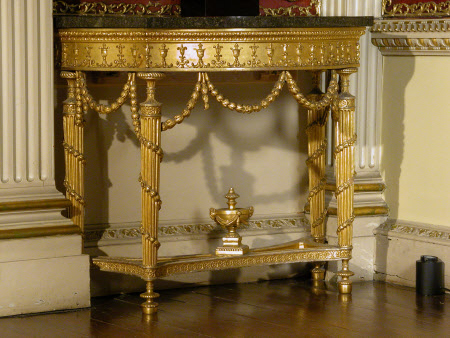 A pier table, one of a pair of carved and gilt pier or end tables, 1771 - 1772, designed by Robert Adam (1728 - 1792) and executed by the carver and gilder Joseph Perfetti (d. 1777). Of demi-lune form, and topped by a slab of polished black stone. The frame with a leaf acanthus-carved moulding above a frieze with alternating urns and harebells, atop a run of foliate scrolls and issuing pendant swags of harebells. The legs turned and tapering and headed by a waisted capital above a band of foliate roundels. The main part of the legs fluted and entwined by a harebell garland issuing from the apron. The legs joined by rectangular-section pierced stretchers carved with foliate roundels and topped by a central urn with drapery swags and on a rectangular socle. The feet turned and with gadronned and beaded knops.

Designed to stand beneath the pier mirrors [NT 871293.1 - .2] which flank the doorway between the Red Velvet Room and the Saloon (or Great Room) at Saltram. The original design from Adam's office survives in the Soane Museum (Soane Drawings 20/70) and is dated 1771. An entry in Lord Boringdon's account records payment to 'Perfetti for Table frames in the Velvet Room...£41' on 31st March 1772. Typical of Perfetti's work, the swags which are pendant from the friezes are reinforced to the reverse with strips of iron. (Megan Wheeler, 2017)