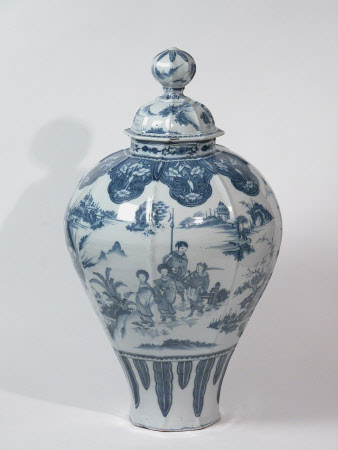 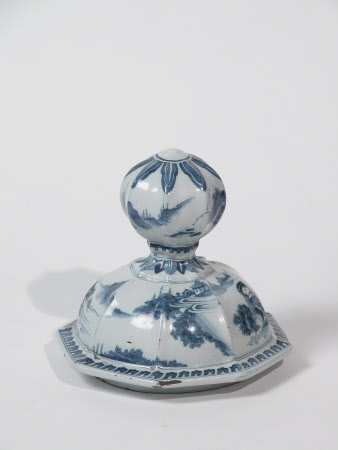 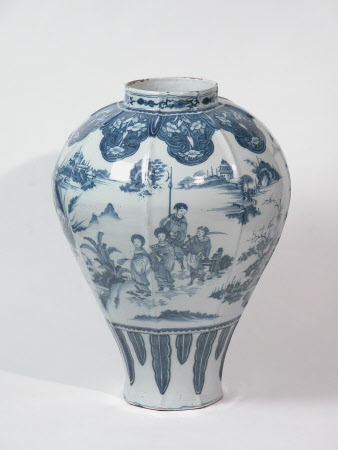 Large vase or jar and cover, tin glazed earthenware (Dutch faience or Delftware), of baluster shape, and octagonal section with applied vertical ribs, on a narrow foot, the domed cover has a large knob. Painted in blue in the Chinese manner, with three groups of figures amoung exotic foliage and cloud scrolls. Dutch, c. 1670-80.

This large unmarked Dutch Delft covered jar, c. 1675, is painted in blue in imitation of Chinese porcelain Transitional period wares of the 1630s and 1640s. In order to imitate the octagonal shape of Chinese originals, the jar has eight raised vertical ribs applied to the thrown body. Jars with similar ribbed features, albeit smaller covers, appear in the details of a map of the city of Delft, 'Kaart Figuratief [Eerste Staat]', published by Dirck van Bleijswijck in 1678.[1] The continuous landscape on the Saltram jar is painted with typical Chinese scholars and attendants after porcelain sources alongside other figures after engraved plates in the travel account of Joan Nieuhof (1618-1672) and Jean-Baptiste Le Carpentier (1606-c.1670), 'Het Gezandtschap der Neêrlandtsche Oost-Indische Compagnie, aan den grooten Tartarischen Cham, den tegenwoordigen Keizer van China', Amsterdam, 1665. Two figures are of an ambassador and an attendant in Safavid costume, identified as ‘Mogolsche gezant’, or Mogol officials, in Plate 211, while two women holding fans appear in ‘Toneel–Speelders, Comediens’, Chinese Actors, in Plate 31. The large jar was probably once part of a 'Kastellen' or garniture set placed on top of a large cupboard.[2] Since 1712, Saltram has been home to the Parker family of Boringdon Hall, Devon, but in the 1670s, the estate was owned by the Royalist Sir George Carteret (1610–1680), who was an influencer at the court of Charles II. [1] Similar ribs are on a teapot, c. 1670-75, at Burghley House, Lincolnshire, inv. no. CER0719. [2] Suzanne Lambooy, ‘Imitation and inspiration: the artistic rivalry between Dutch delftware and Chinese porcelain’, in Jan van Campen and Titus M. Eliëns (eds), Chinese and Japanese Porcelain for the Dutch Golden Age, Zwolle, 2014, 230–248, p. 233. Originally catalogued as Frankfurt faience, German, 1666 - 1690.