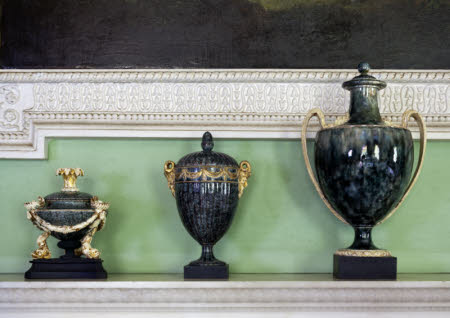 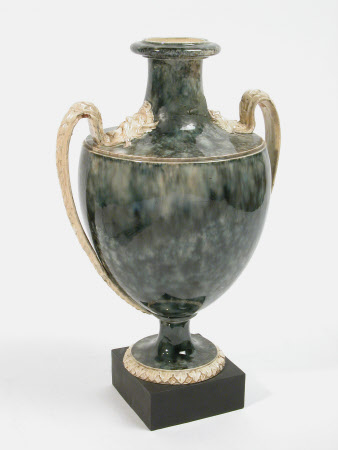 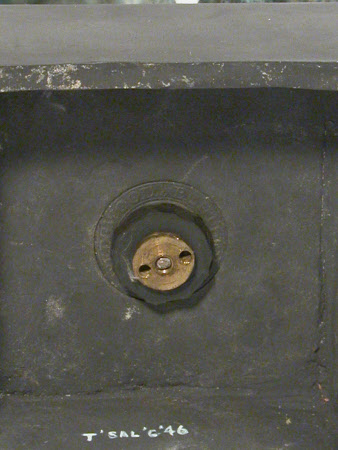 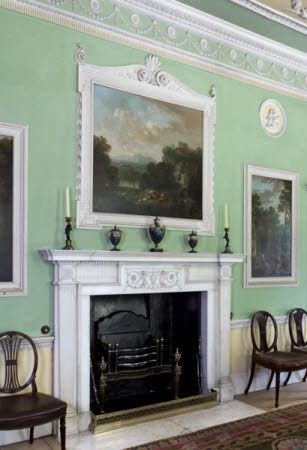 Two handled oviform shaped vase. The cream ware body covered with a mottled greenish glaze. Mounted on a square black basalt base, which has a circular impressed mark. The handles of creamware with traces of gilding. One of a partial ‘Pebble’ garniture of four pieces, made at the Wedgwood and Bentley manufactory, Etruria, Staffordshire, England, in about 1772–5.

In 1769, Josiah Wedgwood announced his intention to become ‘Vase Maker General to the Universe’, capitalising on the vase mania that followed the widely publicised excavations of Pompeii and Herculaneum. By 1772, he had over 100 vase shapes in production, available in three different ceramic bodies – creamware, ‘terracotta’ (stoneware) and black basalt – in various sizes, in an assortment of glazes, with plain or gilt details, and supported on black or white plinths. Inspiration was found in Attic red-figure pottery, ancient marble cinerary urns and colourful seventeenth-century hardstone vases of agate, jasper and porphyry, as well as French and Italian engravings.At Saltram, home of the Parker family, there is a Wedgwood and Bentley garniture for a chimneypiece, resembling fine-grained, dark grey granite. To simulate the depth of colour of the natural stone, the unglazed body was sprinkled before firing with powdered metallic oxides, a mixture of cobalt, iron and manganese, which was protected by a colourless lead glaze. Wedgwood termed the technique ‘variegated’ ware and marketed them as ‘Pebble Vases’. The honey gilding applied to the relief details imitates fashionable gilt-metal mounts on hardstone vases in the French neoclassical style known as goût grec. The tallest vase is a variant of Shape ‘no. 1’ in Wedgwood’s Vase Shape Drawing book (the factory’s record of their ornamental shapes in order of production), which is after an engraving by Joseph Marie Vien published in 1760. The pendant pair of ovoid vases with engine-turned flutes, Shape no. 26, was perhaps inspired by an etching by the German artist Friedrich Kirschner (1748–89), copied in English silver in about 1772–3. The form is similar to a mounted Sèvres vase of about 1765 at The Vyne.The vases are described in Wedgwood and Bentley’s 1774 catalogue: ‘Ornamental Vases of Antique Forms. They are generally sold in Pairs, or Sets of three, five or seven Pieces.’ Those at Saltram may have been part of a five-piece garniture that included two ensuite vase-shaped three-light oil lamps, only one of which survives. This lamp, on dolphin supports, was introduced by Wedgwood around 1770 and has the distinctive rope-like festoons of the goût grec. Five-piece sets, with lighting elements, were offered by Christie and Ansell in the auction of the manufactory’s new stock held on 3 December 1781: ‘lot 19 A set of five Granite; the two end Vases serving for Candelabra’. The Hon. Theresa Parker (1745–75), may have purchased the garniture under the influence of her brother, the newly posted ambassador to Spain, Thomas Robinson, 2nd Baron Grantham (1738–86), who corresponded almost weekly with her on matters of taste. In December 1771, Wedgwood’s London agent, conscious of Lord Grantham’s international influence, sent him news of their new ‘Pebble, Black Terra Cotta and painted Etruscan Vases’.6 However, in 1775, her brother-in-law, Montagu Edmund Parker (1737–1813), also bought ‘urns’ from Wedgwood and Bentley in London, perhaps including this garniture. Their collections were united through a marriage in 1842. Since the 1920s, the three vases have been displayed on Robert Adam’s chimneypiece in the Dining Room, formerly the library.

At Saltram by 1924 and accepted by HM Treasury in part payment of death duty from the Executors of Edmund Robert Parker (1877-1951), 4th Earl of Morley and transferred to NT in 1957.