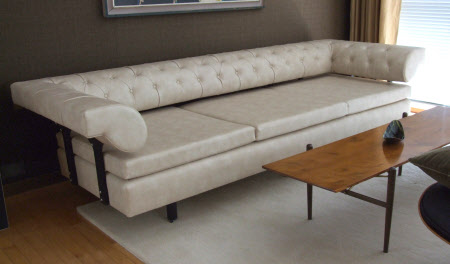 This is a replica of the 3-seater sofa designed by Patrick Gwynne in the 1960s and is an example of specific furniture he designed for his home The Homewood. The original sofa included a cinema screen behind the seat which could then be raised when needed.

A white-vinyl upholstered three-seat sofa, Rugby, manufactured by N. E. J. Stevenson, 2008, the buttoned backrest and armrests formed as one pieces and raised above the sofa seat on ebonized supports fixed to the sides and rear of the sofa, with three upholstered square seat cushions on a plain base, on four ebonized plain square-section legs. This sofa is a replica of the original (NT 864323), designed by Patrick Gwynne in the 1960s. A cinema screen was built in behind the original sofa which could be raised when required, the sofa was fixed to the wall at one end and could pivot slightly to give the correct angle for the cinema screen when raised.