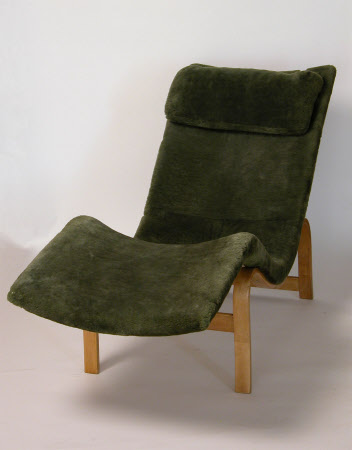 A laminated beech frame 'Model 36' chaise longue, designed by Bruno Mathsson (1907-1988), circa 1933-36, manufactured by Karl Mathsson from 1937, the shaped frame supporting webbing (replaced), on four square-section legs, a stretcher between the two front legs and the two rear legs, with brown sheepskin cover (later replacement and now sunfaded to moss green), with sheepskin covered headrest pillow attached to the top of the seat with two brown leather straps. The underside of the front right seat rail stamped 'Made in Sweden' and applied with a white paper label printed 'Design by BRUNO MATHSSON'. A chair of matching design covered in white sheepskin (NT 864326) also at The Homewood. Bruno Mathsson between 1933 and 1936 designed three chairs called working, easy and loungechair, the model 36. In March 1936, Bruno Mathsson had a one man exhibition at the Röhsska Arts and Crafts Museum and among the exhibits was the model 36. The exhibition proved a great success for Mathsson and his work went on to shown at the 1937 Paris Expo and his chairs ordered in 1939 by Edgar Kaufmann jr. for a new extension of the Museum of Modern Art in New York.

Underside of right seat rail: Stamped 'Made in Sweden' and applied with paper label printed 'Designed by BRUNO MATHSSON'.