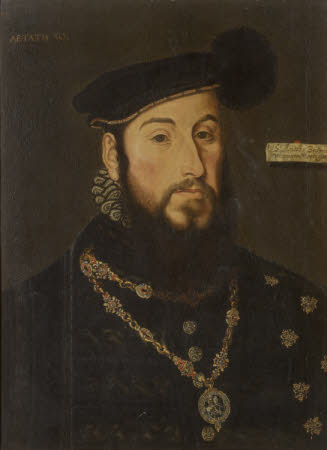 Oil painting on panel, Anthony Browne, 1st Viscount Montagu (1526/28-1592), aged 30, English School, 1556/58. Portrait of a young man wearing the order of the Garter. In ebonised frame. Inscribed on painted piece of paper attached to background wall: 'Sr Antony Browne Viscounte Montague Aetatis 30. A staunch Roman catholic, Montague was however unswervingly loyal to the Crown. He was employed on diplomatic missions to the Pope and to Spain, and was highly esteemed by Queen Elizabeth. He opposed the Acts of Supremacy and Allegiance (1559 and 1562), which threatened the religious activities of the Roman Catholics but he never lost Elizabeth's favour. He was one of the commissioners who tried Mary, Queen of Scots in 1587.