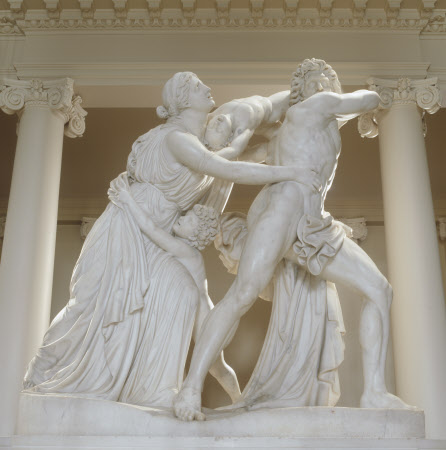 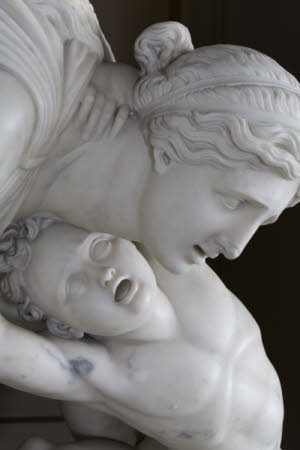 This sculpture was a labour of love for John Flaxman (1755–1826), one of the most accomplished sculptors of his time. It was commissioned in Rome by Frederick Augustus Hervey, 4th Earl of Bristol (1730–1803), for his house at Ickworth in Suffolk but was seized by Napoleonic troops on its journey to England in 1798. The sculpture took Flaxman more than three years to complete but, unfortunately for the artist, in his enthusiasm for the project, he had struck a poor bargain. He was paid £600 for the piece, but the marble alone had cost him £500. The complex, horrifying and tragic subject, The Fury of Athamas, is little known, but depicts the mythical king Athamas killing his son and derives from a tale in the book of Metamorphoses by the Roman writer Ovid (43 BC–c.AD 18). The sculpture finally made its way to Suffolk in the 1820s, when Hervey’s son repurchased it for the original sum of £600.

Marble, The Fury of Athamas, by John Flaxman RA (York 1755–London 1826), 1790-4. A colossal white marble group depicting the violent climax of an episode from Ovid's Metamorphoses, in which Hera reaps revenge on Ino (left) and her husband Athamas (left), the King of Boeotia. In a jealous rage Hera has driven Athamas to insanity. Possessed by the Furies, he is shown seizing his son Learchus moments before hurling him to his death. Ino, in horror and desperation, lunges at Athamas whilst their other child Melicertes grips her waist, terrified. The group is mounted on a wooden pedestal painted white.

This bravura sculpture was commissioned in 1790 by Frederick Augustus Hervey, 4th Earl of Bristol and Bishop of Derry (1730-1803), while Flaxman and Hervey were living in Rome. It was a high-profile commission, which would launch Flaxman's career in a more academic and ambitious line of sculpture. However the process of completing it proved troublesome and protracted. Despite the spectacular physicality of the work, its colossal size, and the sheer amount of marble involved, Hervey only paid Flaxman £600 for the group, which took over three years to complete. In the end, the sculptor was left with only £50 for himself, after material and studio costs (approximately £3,800 in today's money). The commission is understood to have been initiated from Flaxman's now lost terracotta bas-relief of Amphion and Zethus delivering their mother Antiope from the fury of Dirce and Lycus (recorded in a drawing reproduced in Libson 2013, p.43). Hervey initially requested a marble version of this bas-relief, which Flaxman impressively negotiated up to this monumental sculpture group. Elements of the design for Amphion and Zethus can be seen in the final composition: Athamas's powerful lunge and raised arm mirror Amphion's, and Ino's desperate reach for Athamas mirrors Antiope's for Zethus. The pose adapted for Amphion and Athamas appears to quote a sarcophagus relief recorded by Flaxman in the Accoramboni Palace, Rome, in which a warrior lunges forward with his right leg and brandishes a sword with his raised arm bent at a right-angle. Flaxman's drawing of the sarcophagus relief is known through a tracing by William Ottley: see British Museum, London, 2006,0515.45. Athamas' physiognomy and contortion evokes that of the agonised Laocoön (Vatican Museums, Rome), whilst the hurling of the limp Learches recalls a lesser-known antique marble in the Farnese collection which shows Neoptolemus throwing the infant Astyanax over the walls of Troy (Museo Archeologico Nazionale di Napoli, inv.no. 5999). The figure of Ino, meanwhile, may derive from Flaxman's studies of the Niobid group in the Uffizi Gallery, Florence, and Villa Medici, Rome: see Psyche, Yale Center for British Art, Paul Mellon Collection, B1975.3.468(9) and Niobe, with her youngest daughter, Yale Center for British Art, Paul Mellon Collection, 1975.3.468(68). Hervey, who had amassed an impressive art collection whilst in Italy, was arrested in 1798 by Napoleon’s army and the sculpture was seized. It was brought to Paris at the culmination of Napoleon’s victorious Italian campaigns. Ultimately, Hervey’s son, Frederick, 1st Marquess of Bristol (1769-1859) succeeded in purchasing the sculpture for a second time, and it finally came to Ickworth in the 1820s. Alice Rylance-Watson 2019

Commissioned by Frederick Augustus Hervey, the Earl-Bishop (1730-1803) in Rome in 1790 for the sum of £600; confiscated at the behest of Napoleon Bonaparte in 1798 before being purchased in Paris and brought back to Ickworth by Frederick William Hervey, 1st Marquess of Bristol (1769-1859), in the early 1820s; acquired by the National Trust in 1956 under the auspices of the National Land Fund, later the National Heritage Memorial Fund.