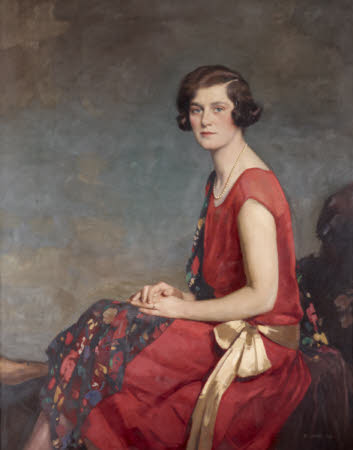 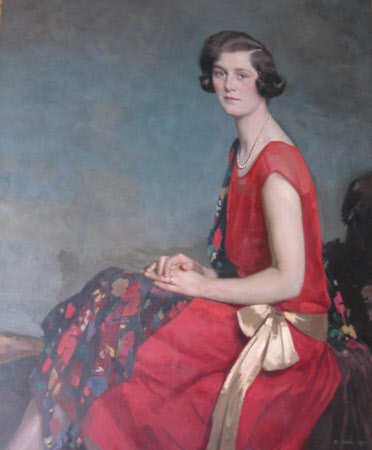 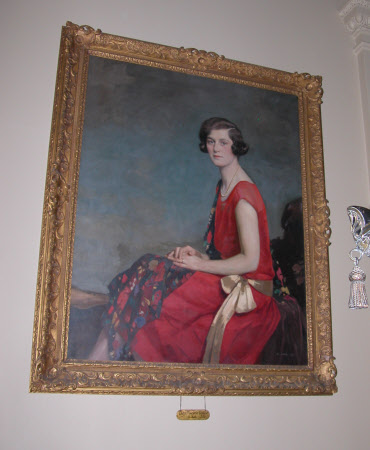 The sitter was the elder daughter of the 4th Marquess of Bristol. In 1919, she married John Francis Ashley, Lord Erskine (1895-1953), eldest son of the 12th Earl of Mar and 14th Earl of Kellie. She and her sister supported their parents’ wish to transfer Ickworth and its most important contents to the National Trust.

Oil painting on canvas, Lady Marjorie Fane Hervey, Lady Erskine (1898-1967) by Richard Jack RA (Sunderland 1866 – Montreal 1952), signed and dated: R.Jack 1927. A three-quarter-length portrait, of a young woman, seated before a greyish-blue sky and natural landscape. She has short brown, wavy hair parted on her left. She wears a mid-length sleeveless red dress, with a champagne-coloured sash caught with a bow and ties on her left side. She has a long floral on blue stole falling in front and behind from her right shoulder. She is wearing a single strand pearl necklace and a gold wedding ring. Marjorie Fane Hervey (1898-1967) was the eldest daughter of Frederick William Fane Hervey (1863-1951), 4th Marquess of Bristol and Alice Frances Theodora Wythes (1875-1957), daughter of George Wythes of Copped Hall. She married, in 1919, John Francis Ashley, Lord Erskine (1895-1953), son of the 12 Earl of Mar and 14th Earl of Kellie.

By family descent to Rear Admiral Frederick William Fane Hervey, 4th Marquess of Bristol (1863-1951), on whose death valued for probate; accepted in lieu of tax by HM Treasury, and transferred to the National Trust in 1956