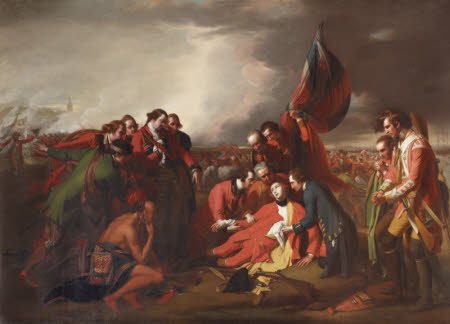 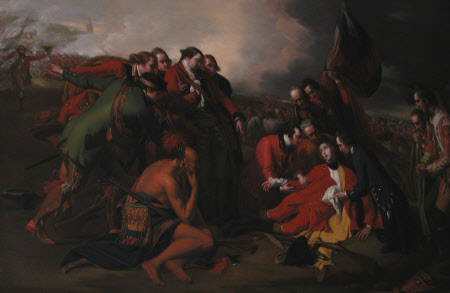 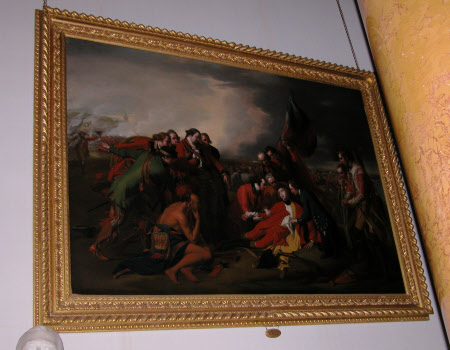 General Wolfe died in 1759 on the Heights of Abraham in the battle which resulted in the capture of Quebec and consequently of Canada from the French. Wolfe was a friend of the Hervey family and an intimate of John, Lord Hervey’s daughter, Lepel, Lady Mulgrave (1723-80). His ADC, Captain Hervey Smyth, shown to the left of the dying man, was a grandson of the 1st Earl. This, the fourth version of the painting, was done for the Earl-Bishop, who described Wolfe as: ‘My military saint, who deserves much more to be canoniz’d than any religious one I have ever read of.’ The first version of the subject, which was exhibited at the Royal Academy in 1771, was bought by Richard, later 1st Earl, Grosvenor. Presented by his descendant, the 2nd Duke of Westminster, to the Canadian War Memorials in 1918, it is now in the National Gallery of Canada, Ottawa.

Oil painting on canvas, The Death of General James Wolfe (1727-1759) by Benjamin West PRA (Swarthmore 1738 - London 1820), signed and dated: bottom left: B. West 1779. Scene of battle in background, and harbour on right with frigates at anchor. Dark grey overcast sky on right, lighter clouds on left. Figures in foreground around Wolfe in brilliant red, green or blue uniforms - colours very brilliant. Blue, pink and grey standard above Wolfe's head. This wholly imaginary scene depicts the following characters: the surgeon Robert Adair holds a handkerchief to Wolfe's heart, supporting Wolfe on the other side are Captain Sir Hervey Smythe, 3rd Bt (1734-1811) an ADC and Colonel Williamson, holding the flag is Lieutenant Henry Browne. The group on the left, from left to right, are Sir William Howe, later 5th Viscount Howe, Lieutenant-Colonel Simon Fraser, Master of Loval, Captain Debbieg, Brigadier Robert Monckton and Colonel Napier. On the right stands one of Wolfe's servants and a grenadier. The pensive Indian is totally imaginary.The 1770 prime version which was the first painting the artist exhibited in public (RA 1771) is in the National Gallery of Canada, Ottawa.

Possibly commissioned by the Earl-Bishop (Frederick, 4th Earl of Bristol & Bishop of Derry) and sent to Ballyscullion, 1802; acquired by Frederick William Hervey, 1st Marquess of Bristol (1769-1859) (his handwritten list of around 1837); thence by inheritance and descent to Frederick William, 4th Marquess of Bristol (1863–1951), at whose death, valued for probate; accepted by HM Treasury in lieu of tax and transferred to the National Trust in 1956