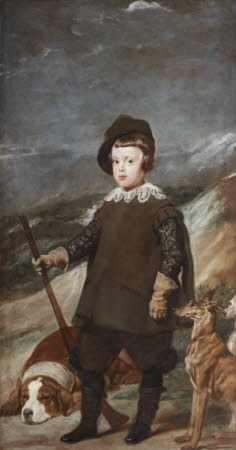 This portrait of a six-year-old boy wearing simple hunting clothes shows Prince Baltasar Carlos (1629–46), heir to the throne of Spain. He stands holding his gun with three dogs at his side: the two greyhounds are alert and upright, while the large brown-and-white hound (identified as a partridge dog) snoozes on the ground. This is one of a number of paintings of the prince by Spanish court artist and master of portraiture Diego Velázquez (1599–1660). Here he creates a scene that presents the young Baltasar in the role of a huntsman, in command of the forces of nature. The picture was designed to hang at a royal hunting lodge, where only the nobility was admitted. Tragically, the prince was to die young, at the age of 16, crushing the hopes of his parents, King Philip IV of Spain (1605–65) and Elizabeth of Bourbon (1602–44).

Oil painting on canvas, Prince Baltasar Carlos, Aged Six, as a Hunter, by Diego Velázquez (Seville 1599 - Madrid 1660), 1635-1636. A full-length portrait of a young boy, Prince Balthasar Carlos (1629-46), in hunting costume, turned to the left, gazing at the spectator, standing against a wintry landscape in the Sierra de Guadarrama. He supports a musket in the right hand, and wears a dark brown cap over short light brown hair, doublet and breeches, with black and silver sleeves, white lace collar, pale fawn gloves and boots. A partridge-dog lies by the Prince’s feet at left and at right sit two Spanish greyhounds, the second half visible.

By descent in Spanish Royal Collections; acquired, possibly in France, by Frederick William Hervey, 5th Earl & 1st Marquess of Bristol (1769-1859); first recorded in an undated list in the Marquess's hand, drawn up around 1837; thence by descent, until surrendered with Ickworth and its contents to HM Treasury, in lieu of the death duty payable on the estate of the 4th Marquess (1863-1951) in 1956; loaned to the National Trust in 1956 under the auspices of the National Land Fund, later the National Heritage Memorial Fund, and then transferred to the National Trust in 1983.