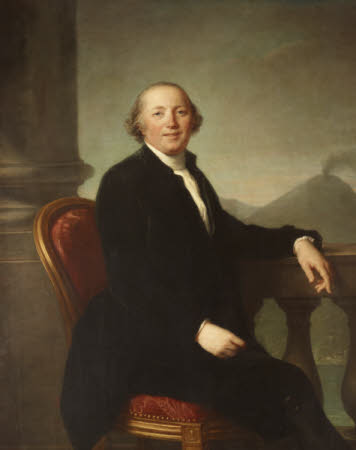 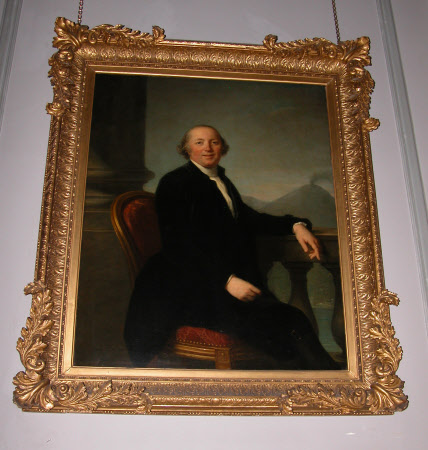 Traveller, builder, collector and patron of the arts, Frederick Augustus Hervey, 4th Earl of Bristol and Bishop of Derry, or ‘Earl-Bishop’, led a capricious and eccentric life. He lived for some time in Italy where he bought and commissioned art indiscriminately. Ironically, while his travels are commemorated by the many hotels worldwide called Bristol, and his architectural vision by his Italianate palace of Ickworth in Suffolk, what should have been his most magnificent legacy - his collection of works of art - has disappeared almost without trace. In 1798 after having amassed a collection which included ‘Cimabue thro’ Raphael and delicious Guido down to Pompeio Battoni … a Correggio that is invaluable and two Claudes’, the Earl-Bishop was arrested by the French and confined at Milan, and his entire collection was confiscated. Fortunately, this portrait by Elisabeth Vigée le Brun survives. The Earl-Bishop sat for the immensely talented French portraitist in Naples and her inclusion of Vesuvius in the background isn't incidental. Not only did the energetic Earl-Bishop climb the volcano on a daily basis, but he was noted for his erratic behaviour and for causing eruptions wherever he went.

Oil painting on canvas, Frederick Augustus Hervey, 4th Earl of Bristol and Bishop of Derry (1730-1803) by Elisabeth Louise Vigée Le Brun (Paris 1755 – Paris 1842), signed and dated L. E. Vigée le Brun 1790. A three-quarter-length portrait of a man, turned to the right, gazing at the spectator, seated in a red upholstered chair on a balcony, his left hand resting on a balustrade, his right on his knee, wearing black clerical dress; a column left. The artist painted Lord Bristol twice, once in Rome in 1789 and this one in Naples which includes a view of Vesuvius on the far right, that Mme Vigée Le Brun claimed that he climbed every day.

Traveller, builder, and patron of the arts, the 4th Earl of Bristol (1730-1803) was during the course of his capricious and eccentric life, a focus of attention. Ironically, while his travels are commemorated by the many hotels throughout Europe that bear the name of Bristol and his buildings by the highly individual monument of Ickworth (Downhill in Northern Ireland is in ruins), what should have been his most magnificent legacy - his collection of works of art - has disappeared almost without trace. In this portrait he is seated on a terrace, with Vesuvius in the background. He appears affable and convivial, a state no doubt stimulated by his daily exercise ascending the volcano. Frederick Augustus, fourth son of Lord Hervey, succeeded his brother the admiral as 4th Earl of Bristol in 1779 and in 1798 inherited the barony of Howard de Walden. By his wife, Elizabeth, daughter of a Suffolk neighbor, Sir Jermyn Davers, 4th Bart., he was the father of the future Marquess of Bristol and of Lady Elizabeth Foster, the famous beauty, whose second husband was the 5th Duke of Devonshire. As a younger son, the 4th Earl entered the church and was consecrated Bishop of Derry in 1768. This preferment may have been due to nepotism, for his brother the 2nd Earl was at this time Lord Lieutenant of Ireland – “a man whose stately manners and delicate form,” according to Horace Walpole, “were ill-adapted to please so rude and turbulent a people as the Irish.” However, the bishop carried out his responsibilities with generosity and tolerance, taking up residence in his see, unlike many other absentee clergy. It is, however, less for the discharge of these episcopal duties that he is remembered than for his activity as a collector and patron, an activity that by 1792 had become an insatiable preoccupation with a didactic purpose. In March of that year he wrote to his daughter Lady Erne: “my own collection is forming from Cimabue thro’ Raphael and delicious Guido down to Pompeio Battoni, the last of the Italian school - and in Germany from Albrecht Durer’s master down to Angelica - but I have no good Rafael, nor any satisfactory Guido, but a Correggio that is invaluable and two Claudes....” (Hervey family MSS, Ickworth, quoted in Child-Pemberton 1925). In a letter to Sir William Hamilton on 26 January 1798, it is clear that he was not particularly interested in the early pictures except as illustrations of the didactic theme that he was pursuing: “they are chiefly Cimabue, Giotto, Guido da Siena, Marco da Siena and all that old pedantry of painting which seemed to show the progress of art at its resurrection.” (Hervey MSS, as above). Two months later Lord Bristol was arrested by the French and confined at Milan, and his entire collection was confiscated. Shortly afterward he wrote to his daughter Elizabeth, describing the extent of his collection - mosaic pavements, “sumptuous” chimneypieces, and old masters “without end”...”first rate Titians and Raphaels, dear Guido’s and three old Caraccis - Gran Dio che Tesoro” (Hervey MSS, as above). During his captivity in Milan the artists of various nationalities in Rome joined in sending a remonstrance (there were 343 signatures) to Haller, the administrator of the finances of the Republican armies in Italy, asking that the collection be restored to their patron. It was finally redeemed for £10,000 under an arrangement with the Directory. Within a week of payment the collection was again plundered, but probably only part of it was lost on this occasion. In 1797 the Earl Bishop had written to William Roscoe, (whose gift of early Italian pictures is now in the Walker Art Gallery, Liverpool), offering any statues, books or pictures that he might like; and in 1802, Roscoe, in a letter to his wife, remarked of certain purchases that they were “as usual part of Lord Bristol’s celebrated importation” (Compton 1960, 27) That Lord Bristol was continuing to buy pictures as late as 1802 is clear from the export records of that year (Ashby 1913, no.8). Sadly, however, his intention to establish a gallery in the rotunda at Ickworth, the vast neo-classical mansion that he planned in consultation with his architect Francis Sandys (and which was never finished in his lifetime), with a view to providing an historical and didactic survey of the history of European painting, was never to be fulfilled. Only the bas-relief decorations on the exterior, designed by Flaxman, remain as a symbol of his patronage. Vigée Le Brun twice painted Lord Bristol: first in Rome in 1789 and a year later, the present picture, in Naples. In her memoirs (1867, I:193) she mentions “un nouveau portrait de Lord Bristol que je retrouvai à Naples et dont on peut dire qu’il passait sa vie sur le Vésuve, car il y montait tous les jours.” Vesuvius was also chosen as a background by Angelica Kauffmann for her portrait of the 2nd Viscount Palmerston at Broadlands, painted in 1764. Its appearance here is particularly appropriate, as Sir Brinsley Ford has observed (1974,430), for in addition to his interest in volcanoes, this energetic cleric caused eruptions wherever he went. (St John Gore, in Gervase Jackson-Stops (ed.), exh. cat., Treasure Houses of Britain. Five Hundred Years of Private Patronage and Art Collecting, New Haven and London, 1985)