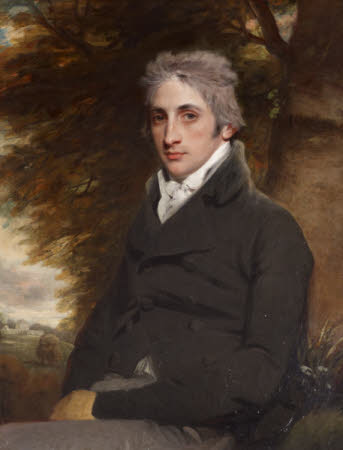 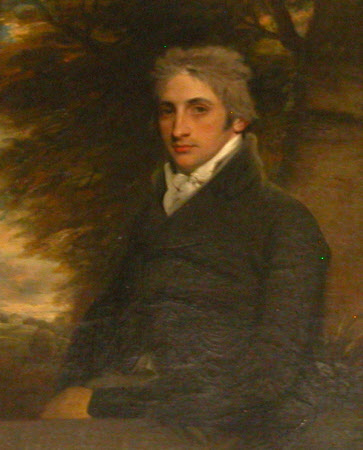 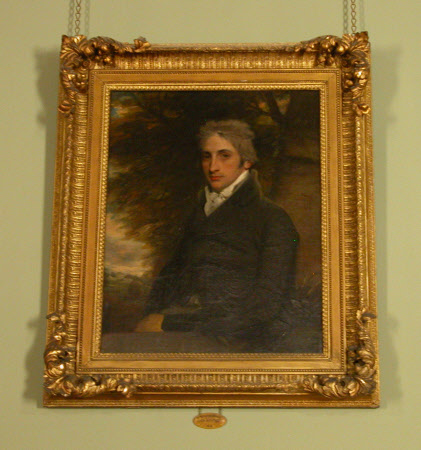 The sitter is the 5th Earl who was the complete opposite in character from his eccentric father, the Earl-Bishop. With the help of the 2nd Marquess, he completed the unfinished interiors of the Rotunda in 1820s and built East and West Wings and curving corridors .He was a Minister in Foreign Office in 1801-3 under his brother-in-law, Lord Liverpool. He was created a Marquess in 1826 through influence of Lord Liverpool, who was then the Prime Minister. Ickworth appears in left background. When the painting was done the house was still being built. So either this building was based on the scale model now on the Museum Landing, or was painted in later.

Oil painting on canvas, Frederick William Hervey, 5th Earl of Bristol and later 1st Marquess of Bristol, MP, FRS, FSA (1769-1859), aged 30 by John Hoppner, RA (London 1758 – London 1810), circa 1800. A half-length portrait of a man turned to the left, gazing at the spectator, seated, leaning against a tree, wearing dark grey coat and white stock; an imaginary view of Ickworth, with straight, rather than quadrant, wings in the distance, left.

Generally said to have been in Lord Howard de Walden’s posthumous sale, Christie’s, 10 March 1869, lot 467 as an 'Unknown Gentleman in a Landscape by Hoppner' [perfectly plausibly, since it was bought for £15.4.6d by ‘Wright’, who bought Kauffman’s Lady Elizabeth Foster, Duchess of Devonshire on behalf of the family at the same sale (see also Ozias Humphry’s copy of the bust of Gainsborough’s of Augustus John Hervey, 3rd Earl of Bristol, which was bought by ‘Harris’ on behalf of the family)]; thence by descent and inheritance to Frederick William, 4th Marquess of Bristol (1863-1951), recorded at the death of the 3rd Marquess (1834-1907); on the death of the 4th Marquess (1863-1951), valued for probate; accepted in lieu of tax by HM Treasury, and transferred to the National Trust in 1956

Verso: Inscribed on the back: in heavy black, at top, (now bottom, upside down): L.S.No .23 [presumably a Howard de Walden location]