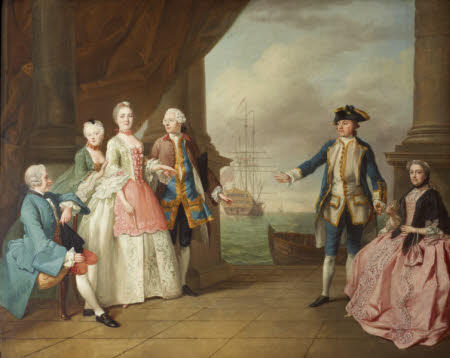 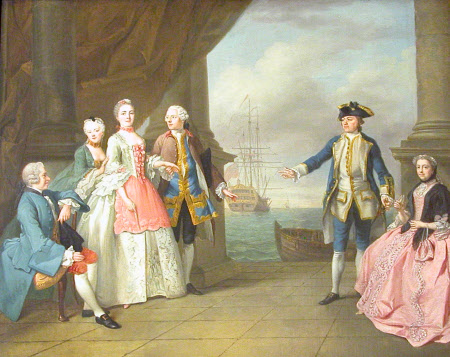 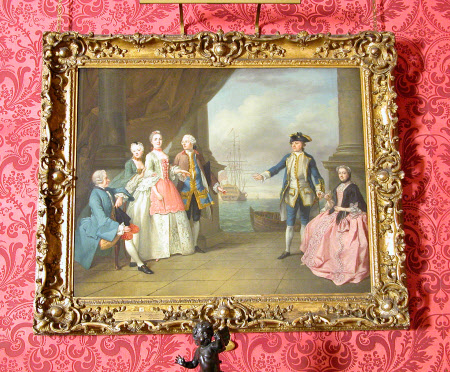 This group portrait was commissioned by Mary, Lady Hervey in Paris in 1750 but was completed in England by other unknown artists after she became impatient with its progress. It shows the future 3rd Earl of Bristol with his mother, Mary, Lady Hervey (seated on the right), his two married sisters, and their husbands, Constantine Phipps, later Lord Mulgrave, and George Fitzgerald, MP. The ship in the background seems to be the 3rd Earl’s last command, the Dragon.

Oil painting on canvas, The Hon. Mrs Constantine Phipps (1722-1780) being led to greet her Brother, Captain the Hon. Augustus Hervey, later 3rd Earl of Bristol (1724-1779) by Hubert-François Bourguignon known as Hubert Gravelot (Paris 1699 - Paris 1773) with Jean-Etienne Liotard (Geneva 1702 – Geneva 1789), and possibly Francis Hayman (Devon 1708 - London 1776), 1750. The six figures are: Augustus John Hervey, later 3rd Earl of Bristol (1724-1779), Mary ('Molly') Lepel, Lady Hervey (1706-1768), Constantine Phipps, 1st Lord Mulgrave (1722-1775), The Hon. Lepel Hervey, Mrs Phipps (later Lady Mulgrave) (1722-1780), Lady Mary Hervey, Lady Mary Fitzgerald (1726-1815) and her husband George Fitzgerald, MP. A painting with brilliant colours commissioned in Paris in October 1750 where the six full-length figures were and completed in England. The artist Gravelot painted the bodies of the group and bizarrely the artist Liotard painted their heads. In the end though Liotard completed only the heads of the Phipps, and Gravelot painted the heads of the Fitzgeralds and Lady Hervey. However Lady Hervey was dissatisfied with the result and subsequently had her own head and that of her son painted back in England. The group appear before the pillars of a portico with a view of the sea beyond, a small boat is immediately beyond the portico, a large ship, possibly the seventy-four-gun Princesa, a Spanish prize taken in 1740 and Hervey's first post ship (or last command, the Dragon), further out and another on the horizon. Lady Hervey’s dress is pink with a black shawl; Lord Hervey is in blue with gold braid, in the undress uniform of a naval captain; Mr George Fitzgerald wears a murrey-brown coat and blue waistcoat; Mrs Phipps wears a pink and white dress; Mrs Fitzgerald is in green and Constantine Phipps wears blue.