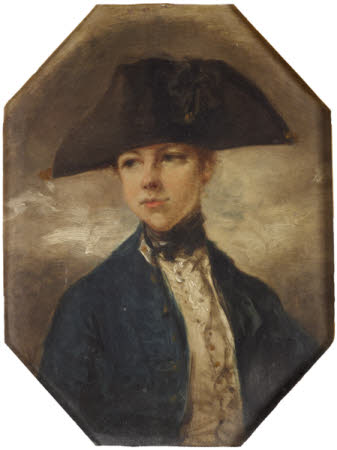 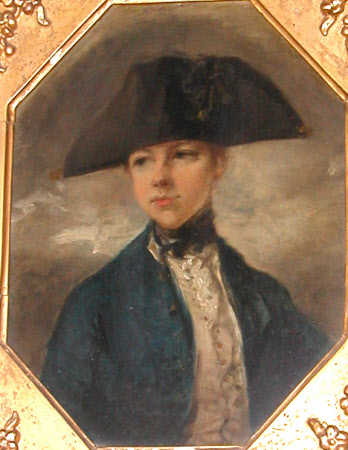 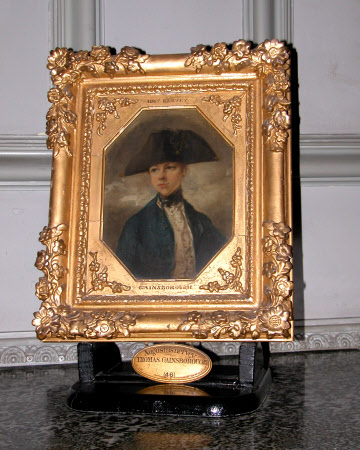 The sitter was the natural son of Augustus John Hervey, 3rd Earl of Bristol (1724-79) by Kitty Hunter. He was killed by a canon ball in Lord Howe’s action after the Relief of Gibraltar. It is unusual for Gainsborough in its small scale and tin support. It was probably painted for the sitter’s de facto foster-mother, Mary Davis, Mrs Nesbitt (c.1735-1825), the last mistress of his natural father, which she had become by around 1771. It is possible, given its unusual format, that the boy might have commissioned it to give to her. It was probably painted around 1780.

Oil painting on tin, Augustus Hervey (c.1765-1782) by Thomas Gainsborough RA (Sudbury 1727 - London 1788), inscribed: on paper label on backboard: Portrait by Gainsborough, painted on tin, of Augustus Hervey, Natural Son of Augustus John, Earl of Bristol. He was killed by the side of his captain, Lord Mulgrave, commanding HMS Le Courageux [ ] Guns, in Lord Howe’s Action with the combined French & Spanish fleets, after the Relief of Gibraltar in 1782. Edmd Phipps, circa 1780. An octagonal half-length portrait of a young boy turned slightly to the right, gazing and head inclined to the left, dressed as a midshipman, and wearing blue jacket, blue cocked hat, dark necktie, fawn waistcoat and a cocked hat. Grey sky background. Small painting on stand. The unusual support of tin suggests it was intended to be sea-worthy. He was the illegitimate son of Augustus John Hervey, 3rd Earl of Bristol (1724-79) by Kitty Hunter. The young boy was sent to King Edward Grammar School, Bury St Edmunds in 1779 and then entered the navy. He served under the 2nd Lord Mulgrave, his cousin, on the 'Courageux' in Admiral Lord Richard Howe’s action for the final Relief of Gibraltar. He was killed by a cannon ball in October 1782. The young boy had made his will in 1781, amongst his few belongings he mentioned his gold watch, his late father’s ring, a gold box set with diamonds with pictures of the Emperor and Empress, his lace ruffles, his silver shoe and knee buckles, silver and gilt shoe buckles and stone set knee buckles. The Plampin family of Chadacre received most of his property. John Plampin was a naval lieutenant, he was to receive the journals, logs, sword, pistols and spying glasses. He also mentioned John’s son George Plampin “now at school with me at Bury St Edmunds". His mother, Kitty Hunter was Catherine, one of the two younger of the four daughters of Thomas Orby Hunter (c.1716-1768), MP, of Crowland Abbey, Lincs. and Waverley Abbey, Surrey, and his wife, née Jacomina Bellenden. He was a Lord of the Admiralty (1756-57), and of the Treasury (1763-65). Catherine was a Maid of Honour to the new Queen Charlotte, and her elopement with the already-married 10th Earl of Pembroke from a masked ball at Lord Middleton’s on 18th February 1762 created a great scandal. He returned to his wife and to royal favour, however, being appointed Colonel of the 1st Royal Dragoons in 1764. The returns appear to have been facilitated by his friend, Captain Hervey (later 3rd Earl of Bristol) taking on Kitty Hunter as his mistress, giving him in exchange an autograph head-and-shoulders repetition by Reynolds, paid for in April 1763, of his three-quarter-length portrait of himself (cf. Sidney, 16th Earl of Pembroke, A Catalogue of the Paintings and Drawings in the Collection at Wilton House, 1968, no.67, p.31 & pl.133). Captain Hervey may not, however, have been the immediate recipient of the runaway, since Reynolds’s second portrait of Kitty Hunter, also probably painted in 1763 (Mannings, Cat. no.971, p.271 & fig.717), was given, not to Captain Hervey, but to Gibbs Crawfurd or Craufurd, of Saint Hill, Sussex [next door to Nymans]. Some time around 1765 she gave birth to the sitter in the present portrait – the 3rd Earl’s only male offspring – and not so long after that she married, as his first wife, Captain (later Field-Marshall Sir) Alured[?] Clarke (Reynolds made a note of her portrait being engraved – if it ever was, plate and print were destroyed – by Valentine Green, as ‘Mrs. Clarks Picture’, in November 1771; see Mannings). She died in 1795.

Probably painted for the sitter’s de facto foster-mother, Mary Davis, Mrs Nesbitt (c.1735-1825), the last mistress of his natural father, Captain Augustus Hervey, later 3rd Earl of Bristol (1724-1779), which she had become by circa 1771 (or could the boy have commissioned it to give to her? – that might help explain its small size and unusual support and format. Certainly, to judge by D.E. Weston’s citations from his will, it was not in his possession in 1781). If hers, it was probably left, like the Gainsborough whole-length of the 3rd Earl now also at Ickworth, to the Hon. Anne Phipps (d. 1848), only child of Constantine John, 2nd Baron Mulgrave, who married Lieutenant-General Sir John Murray, 8th Bt, of Dunerne (d. 15th Oct. 1827), but bore him no children. If so, instead of putting it up for auction on 17th May 1827 like the whole-length of the 3rd Earl, Lady Murray either retained it until her death, and then left it to her first cousin, the Hon. Edmund Phipps (1808-1857), 3rd son of Henry, 1st Earl Mulgrave; or she left it to her uncle, General the Hon. Edmund Phipps (1760-1837), who died without marrying or issue, and who appears to have left everything to his nephew (and godson?), the Hon. Edmund Phipps, in whose posthumous sale in 1859 his collection of paintings was sold. Alternatively, this picture was either given by the boy himself to his captain and cousin, Constantine John, 2nd Baron Mulgrave (1744-1792), or given to the latter as a memento after the boy’s death. Whichever of these was the case, he left it either to his daughter, Anne, Lady Murray (and it would then have passed in one or other of the two ways listed above), or to his younger brother, General the Hon. Edmund Phipps, whose collection was sold in his nephew, the Hon. Edmund Phipps’s posthumous sale at Christie’s, 25 June 1859 (whose catalogue described itself as Catalogue of the Valuable Ancient and Modern Pictures collected by the Hon. General Phipps, Deceased, and the Property of the Hon Edmund Phipps, Deceased), lot 72, as by Gainsborough; bought for £60 by ‘Jos’ (?= Christie’s sale clerk?) on behalf of Frederick William, 2nd Marquess of Bristol (1800-84). The facts that this little picture is painted on tin, probably thought of as a protection against corrosion by water (cf. the backings of the paintings in the fishing pavilion at Kedleston), and that there was an apparent representation of it in one of the two portraits of Captain Phipps, 2nd Baron Mulgrave commissioned from Gainsborough in 1785/6 (the one formerly in the collection of his daughter, Anne, Lady Murray – who inserted it into the same sale on 17th May 1827 as the Gainsborough of the 3rd Earl of Bristol, as lot 110 – and now in the Smithsonian Institute in Washington), before that was cut down, both point to the second hypothesis – that of ownership by the 2nd Lord Mulgrave – being the likeliest of the two ; thence by inheritance and descent to the 4th Marquess (1863-1951), until accepted by HM Treasury in lieu of death duties, and transferred to the National Trust in 1956