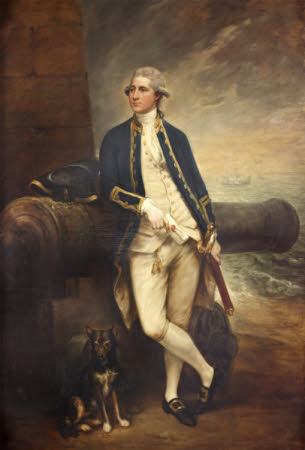 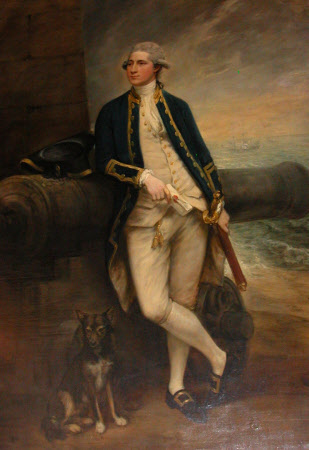 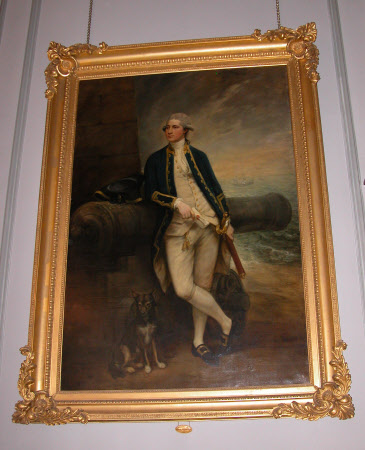 The sitter was the second, but eldest surviving son of Frederick, 4th Earl of Bristol and Bishop of Derry (1730-1803). It has been suggested that the portrait was painted at the time of Lord Hervey's marriage in 1779. His undiplomatic behaviour in Florence is well-documented. He flaunted public opinion by living with Lady Anne Hatton and later insulted the Grand Duke, which in 1793/4 led to his recall from his position as envoy. Lord Holland wrote to his sister, in July 1794, that: “The Tuscans must indeed have a strange notion of the English. Lord Hervey abuses the Prime Minister and the Grand Duke, and is recalled for his presumption.” Hervey was also described as ‘intemperate, indecorous, and violent in the extreme …..’ The dog portrayed here was called ‘Twitchet’, after his Admiral. Hervey died at sea before his father and so never inherited Ickworth.

Oil painting on canvas, Lord John Augustus Hervey (1757-1796) by Thomas Gainsborough RA (Sudbury 1727 - London 1788), circa 1779. Full-length portrait of a man in naval uniform, facing slightly left, standing on a sea-shore, leaning against a cannon which points out to sea; on the cannon rests his cocked hat in dark blue edged with gold braid; his uniform consists of a dark blue cut-away coat edged with gold braid, gilt buttons on the sleeves and facing lapels, light greyish waistcoat with gilt buttons down the front, and matching knee-length breeches, white stockings, and black shoes with gilt buckles; under his left arm a telescope, in his right hand a folded document with a broken red seal; a small dog (called ‘Twitchet’ [named after his Admiral] or ‘Twitcher’ [after ‘Jemmy Twitcher’, the name of the highwayman in The Beggar’s Opera, which became the sobriquet of John, 4th Earl of Sandwich, First Lord of the Admiralty?]) is seated on the ground beside him on the left-hand side. Background: sea beyond, with a ship in the distance, overcast sky. Second, but eldest surviving son of Frederick, 4th Earl of Bristol and Bishop of Derry (1730-1803); 1780, Captain R.N.; succeeded Horace Mann as Envoy at Florence, 1787/8-93/4, where he flaunted public opinion by living with Lady Anne Hatton and later insulted the Grand Duke of Tuscany, which in 1793/4 led to his recall from his position as envoy. He married Elizabeth Drummond, daughter of Colin Drummond of Megginch, at Quebec in 1779, and was the father of Elizabeth Catherine Caroline Hervey, later Mrs Charles Rose Ellis, mother of the 6th Lord Howard de Walden. He died at sea before his father and so never inherited Ickworth.

Early provenance not known [but, because neither in the 1st Marquess’s handwritten list of c.1837, nor in Gage’s Thingoe Hundred in 1838, it probably descended to the sitter’s only child, Elizabeth (1780-1803), who married Charles Rose Ellis, 1st Lord Seaford (1771-1845). Since, however, it was already listed as in the possession of the Marquess of Bristol in Fulcher’s Gainsborough in 1856, it probably reverted to the sitter’s ancestral family after Lord Seaford’s death, instead of either being left to his second wife, Anne Berkeley, Lady Masterman Hardy, who did not die until 1877, or to his surviving son, Charles (1799-1868), who had succeeded the sitter’s father as 6th Lord Howard de Walden in 1803]; thence by inheritance and descent to the 4th Marquess (1863-1951), until accepted in lieu of death duties by HM Treasury. Loaned to the National Trust in 1956 under the auspices of the National Land Fund, later the National Heritage Memorial Fund, and then transferred to the National Trust in 1983.