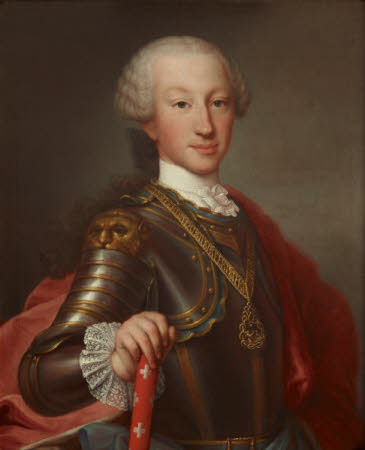 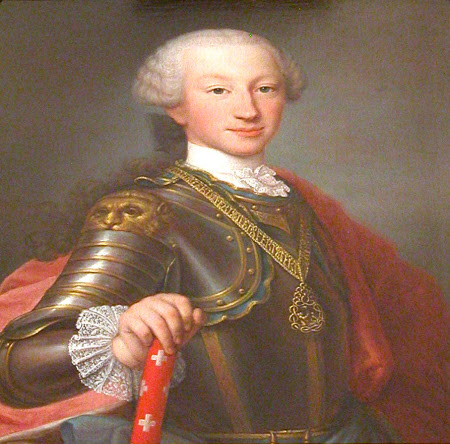 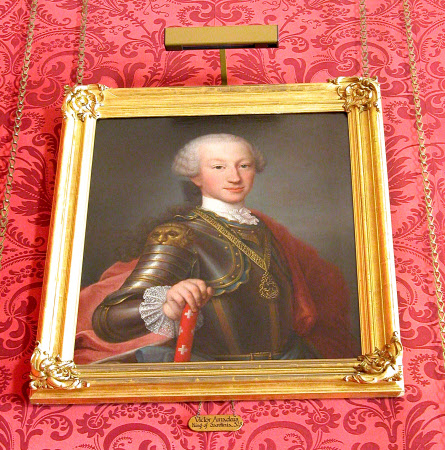 Vittorio Amedeo III of Savoy was the son of Charles Emmanuel III (whose portrait is also at Ickworth) and his second wife, Polyxena of Hesse-Rheinfels-Rottenburg. He succeeded to the throne of Sardinia after the death of his father in 1773, and married the Infanta Maria Antonia (see her portrait also at Ickworth). His three sons reigned after him: Charles Emmanuel IV (1796-1802); Victor Emmanuel I (1802-1821); and Charles Felix (1821). The portrait is painted in a ponderously careful manner and must be by a copyist. Duprà’s style, to judge by the painting belonging to the Duke of Hamilton, was smooth and highly finished. It seems likely that the original portrait of Victor Amadeus belongs to about the time of his marriage in 1750, when Duprà is known to be at the court at Turin. This painting was almost certainly acquired by George William Hervey, 2nd Earl of Bristol (1721-1775) when envoy at Turin, 1755-58.

Oil painting on canvas, King Victor Amadeus III, King of Sardinia (1726-1796), after Domenico Duprà (Turin 1689 – 1770), circa 1755-1758 (after an original of circa 1750). A half-length portrait of a young man, turned to the right, gazing at the spectator, wearing a dark grey suit of armour, white cravat and pink cloak, chain and order of the Annunciation (a House of Savoy Order), a red baton decorated with white crosses (indicating the House of Savoy) held in his right hand. Dark grey/blue background. (See also miniature No.35, 2nd cabinet).

Almost certainly acquired by George William Hervey, 2nd Earl of Bristol (1721-1775) when envoy at Turin, 1755-58, and, possibly with NT 851712 and ICK/P/166, especially copied for him; thence by inheritance and descent until the death of Frederick, 4th Marquess of Bristol (1863-1951), when valued for probate; accepted, with the house and part of the estate, by HM Treasury in lieu of death duties in 1956, and transferred to the National Trust.