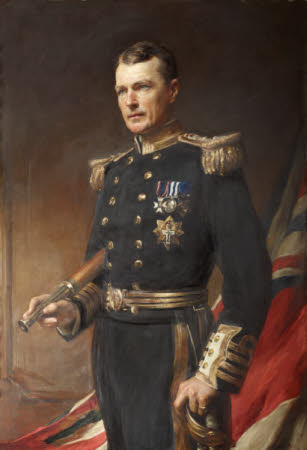 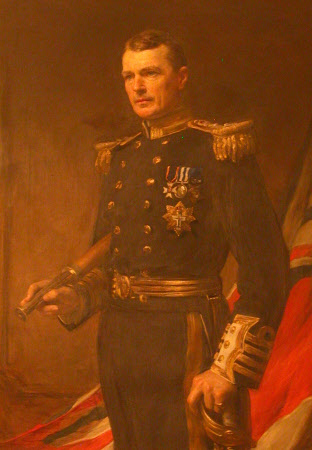 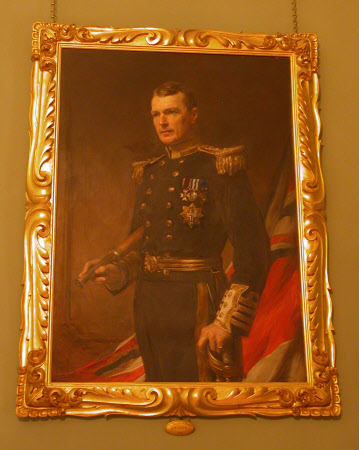 The sitter, who succeeded his uncle in 1907, is portrayed here as a Captain in the Royal Navy. He later became a Rear Admiral. The medals he is wearing are displayed at Ickworth. His naval career, and a notable stamp collection were achieved despite colour-blindness.

Oil painting on canvas, Rear Admiral Frederick William Fane Hervey, 4th Marquess of Bristol (1863-1951) by Sir Arthur Stockdale Cope, KCVO, RA (London 1857 –1940), signed and dated, bottom right: A. S. Cope. / 1908. A three-quarter-length portrait of a man, standing, turned slightly to left, gazing to the left, wearing naval uniform, a telescope under his right arm, left hand resting on sword hilt. In the background to the right is a draped Union Jack. Frederick succeeded his uncle, the 3rd Marquess in 1907. He is seen here as a Captain in the Royal Navy, and he later rose to the rank of Rear Admiral. He married Alice Frances Theodora Wythes in 1896. He is wearing four medals: Royal Victorian Order, 4th class.The Order was established by Queen Victoria in April 1896. The Order is conferred for extraordinary, important or personal services to the Sovereign or to the Royal Family. Members of the Fourth Class (MVO) wear the badge on the left breast. The Egyptian Medal (1882-9) was awarded to all soldiers and sailors who took part in the operations in Egypt and the Sudan, 1882-9, and the blue and white stripes in the ribbon are sometimes said to typify the Blue and White Niles. The Khedive Bronze Star (1882-91)The Khedive of Egypt presented a bronze star to every officer an man of the Navy and Army who had received the British war medal for the Egyptian campaigns, 1882-5. The star was first given for the 1882 campaign, but it issue was subsequently extended for 1884, 1885, 188-89 and 1890 operations and The Spanish Order of Naval Merit. Created in 1866 in four classes, to which a fifth class in the shape of a silver cross, was later added.