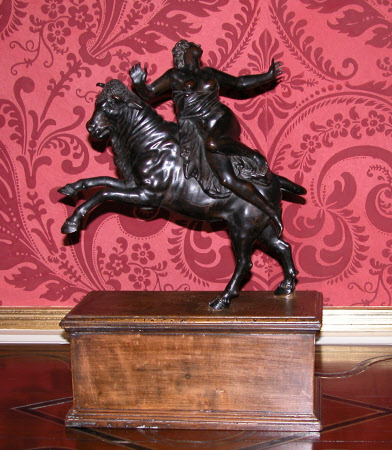 Bronze with black lacquer on wood plinth, Europa and the Bull after Giambologna (Douai 1529 - Florence 1608). In Greek mythology, Europa was the daughter of King Agenor of Tyre who was abducted by Zeus (Jupiter), in the guise of a white bull, and taken across the sea to Crete where, in human form, Zeus (Jupiter) then raped her as described in the Roman poet Ovid's Metamorphoses. This model was designed as a pendant to Nessus and Deianeira as the female figures are analogous. This present example of casting is thin and light and the fixing of Europa and her drapery is not as fine as it could be. There are other versions in the Bargello, Florence and Palazzo Venezia, Rome.

Acquired by Frederick Augustus Hervey, 4th Earl of Bristol and Bishop of Derry (1730-1803) and thence by descent to Rear Admiral Frederick William Fane Hervey, 4th Marquess of Bristol (1863-1951), on whose death valued for probate; accepted in lieu of tax by HM Treasury, and transferred to the National Trust in 1956