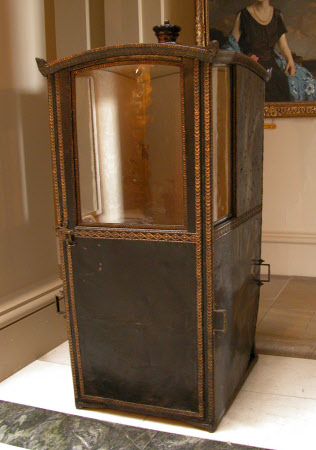 The equivalent of a one-person taxi, the sedan chair was a popular mode of transport for the wealthy. This sedan chair belonged to the second wife of the 1st Earl, Elizabeth Felton. Unfortunately, Elizabeth was reported to have died in it while being carried through St James’s Park in May 1741.

Sedan chair built in the 1790s almost certainly built by William Griffin of 1 Whitcombe Street, London. Sedan chair in the Westminster style with an arched roof, highly polished japanned leather panels and stamped brass ornamentation. Raised and chased gilt metal cypher EAB in mantle surmounted by an Earls coronet to centre upper rear panel. A carved wooden painted Countess’s coronet on a crimson cushion with gilt corner tassels is screwed or coach bolted to the centre of the arched roof. The interior is upholstered with white silk.

Sedan chair in the Westminster style with an arched roof with highly polished japanned leather panels and stamped brass ornamentation. The interior is upholstered with white silk. There are the initials EAB surmounted by an Earls coronet to centre upper rear panel. A carved wooden painted Countess’s coronet on a crimson cushion with gilt corner tassels is situated on the arched roof. This is one of six arch-roof chairs in the care of the National Trust. Its ornamentation typically dates from the close of the arch-roof middle period c.1790 to 1805. From the time of George I the Westminster English sedan chair is almost unique in Europe for having sides which taper by up to two inches. This design allows rainwater running off of the roof to miss the window apertures. It also makes life easier for the rear chairman when negotiating narrow doorways as the roof (instead of the pole lugs) becomes the widest part of the sedan.

Part of the Bristol Collection. Acquired by the National Trust in 1956 under the auspices of the National Land Fund, later the National Heritage Memorial Fund. Countess of Bristol, to build a ladies elegant fashionable sedan chair. Japanned and highly polished panels, mounted with plain borders all round, fancy pattern to elbow band and roof valance. Inside lin’d with rich white silk, door pocket, festoon curtains and fringe, corner tassels, cypher EAB in mantle and coronet to rear, carved coronet and cushion on roof, varnished poles and straps, green baize cover. Price c. 47 guineas.