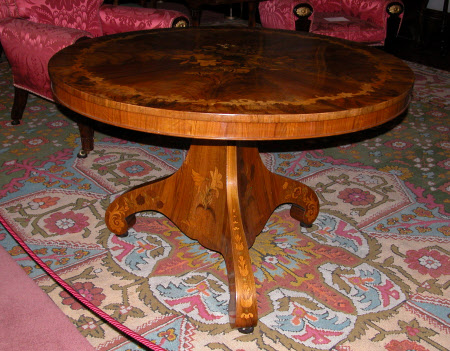 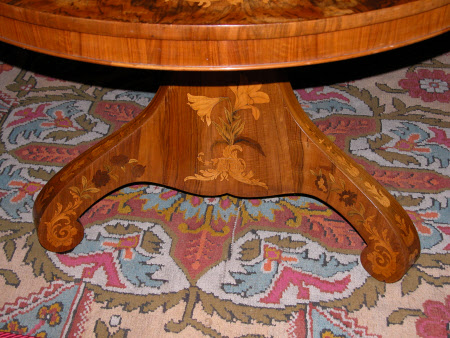 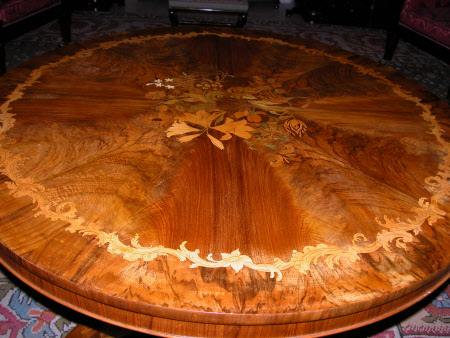 A marquetry inlaid walnut centre table, English circa 1835 after a design by Richard Bridgens possibly made by Edward Holmes Baldock (1777-1845). The circular hinged top inlaid with bone, stained holly and birch, the centre with a floral design and a butterfly within a border of trailing floral scroll work. The spreading concave triform pedestal with further inlay and scrolled feet.

The Victorian pattern for such a 'Marqueterie Centre Table', with hollow-sided and Vitruvian wave-scrolled 'altar' or 'candelabrum' pedestal, appears to have been designed in the early 1830's by the architect Richard Hicks Bridgens and featured in his Furniture with candelabra and Interior Decoration, 1st ed. 1825 & 1838. The form of the base of this table relates to tables supplied by Edward Holmes Baldock (1777-1845), one of which was produced for The Duke of Buccleuch in 1840. It was removed and sold from Dalkeith Palace. It is now at Temple Newsam House, Leeds (C. Gilbert, Furniture at Temple Newsam House and Lotherton Hall, vol. II, London, 1978, no. 395). The marquetry decoration featured on this table is executed in the Dutch style first adopted in the 1820's by the Tottenham Court Road 'Cabinet inlayer and Buhl manufacturer' Robert Blake. The firm, which had been trading in the early 1840's as Blake, Geo. & Brothers, inlayers, etc' in Tottenam Court Road and Mount Street, Mayfair were renamed George Blake & Co. in the late 1840's (C. Gilbert, Pictorial Dictionary of Marked London Furniture 1700-1840, Leeds, 1996, p.18; and M.P. Levy, Furniture History Society Newsletter, no. 158, May 2005). A marquetry desk at Goodwood House displaying similar floral marquetry, labelled 'Messrs Blake's' [sic] features similar foral marquetry (see M. Levy, 'E.H.Baldock and the Blake Family: Further Evidence', Furniture History, Newsletter No. 158, May 2005, p.1). (James Weedon 2017)