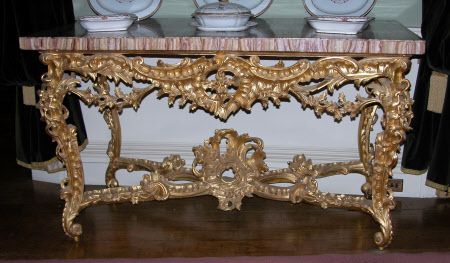 One of a pair of giltwood and onyx marble console tables, North Italian, probably Turin, circa 1755 The rectangular marble top above a pierced foliate scrolling carved frieze with garlands of flowers and raised on heavily carved conforming cabriole legs and scrolled feet. The four legs tied by an X stretcher centered by a floral cartouche.

These tables were almost certainly bought in Italy by the Earl Bishop when he was appointed British Minister in Turin (1755-8) The elegant and finely carved giltwood console tables are consistent with other mid-18th Turinese pieces. The high-hipped legs carved with rocaille relates them to examples in the Palazzo Reale, Turin. There are two pairs on console tables and mirrors in the Ickworth collection NT850066 and NT850051 which were also almost certainly bought in Turin by the Earl Bishop. See Viale, Mostra del Palazzo Piemontese, Vol 3, pl.60, fig. b and pl.66, fig.b.) and 63, plates 55 (Palazzo Reale; slightly earlier, c.1730), plate 66 a (Palazzo Reale, Turin) and b (Private Collection, Turin), both c.1750 or slightly later. (James Weedon 2017)

Part of the Bristol Collection. Acquired by the National Trust in 1956 under the auspices of the National Land Fund, later the National Heritage Memorial Fund.It is quite likely that these tables were bought by the Earl Bishop in Turin circa 1755.